The mid-morning sun was shining on the northern side of Norfolk Island National Park, throwing speckled light across my face. I was sitting amongst thickets of African Olive and Red Cherry Guava, my back resting against the gnarled trunk of an olive tree. I had pushed, crawled and manoeuvered my way through the dense, weedy bush, all to get to one of my study sites to conduct a fifteen-minute bird survey. Fifteen minutes of silently waiting for any of my birds to make themselves known.

I was in the final week of a three-month-long field season on Norfolk Island. My job over those three months was to learn whatever I could about the island’s five endemic perching bird species: the Norfolk Robin, Slender-billed White-eye, Norfolk Gerygone, Norfolk Grey Fantail and Norfolk Golden Whistler. I had spent hundreds of hours following individual birds in the hopes that they would lead me to a nest; hundreds of hours tromping through the bush, setting up camera traps, climbing trees, literally hanging out on limbs, all to get a glimpse of a chick’s beak or the curve of a tiny speckled egg.

It’s not that these birds are rare in the National Park; I would see them every day, flitting through the forest or sitting on a perch preening a member of their social group. Often, they would announce my arrival to their significant others, inspecting me with a delightful curiosity.

It’s just that I hadn’t yet ‘cracked’ their nesting behaviour – those subtle cues that announce the imminence of new arrivals. I had given it a red-hot go, but there was precious little information to go on, with less than a handful of other researchers working on the same project. This kind of information is critical in better understanding how these endangered White-eyes use their environment. It all comes down to the ultimate goal of conservation: the more we know the better we can protect. My field season was coming to an end and it was time to attend to other business, like my pilot study on habitat-use across the island. Which is what brought me to this moment, sitting amongst the crackling leaf litter in the middle of olive country.

I was about three minutes into my survey when I noted a Slender-billed White-eye, then another, and another. I noticed that one of them had a beak adorned with a tangled mess of spider-web. That’s weird… I thought. Why would a White-eye have spider-webs on its… OH. MY. BIRD. Lo and behold there it was: the beautiful little hammock of a Slender-billed White-eye’s nest, neatly hanging from a forked twig of an olive tree. My heart was positively jumping with excitement.

I spent the next 12 minutes sitting excruciatingly still so I could finish my survey before I went to take a closer look at the first Slender-billed White-eye nest I had ever seen. Nestled at the bottom was a single precious egg the colour of a cloudless sky. I recorded some data, set up a camera, and went on to finish my surveys, galvanised by the understanding that I was contributing to a small but growing pool of knowledge. 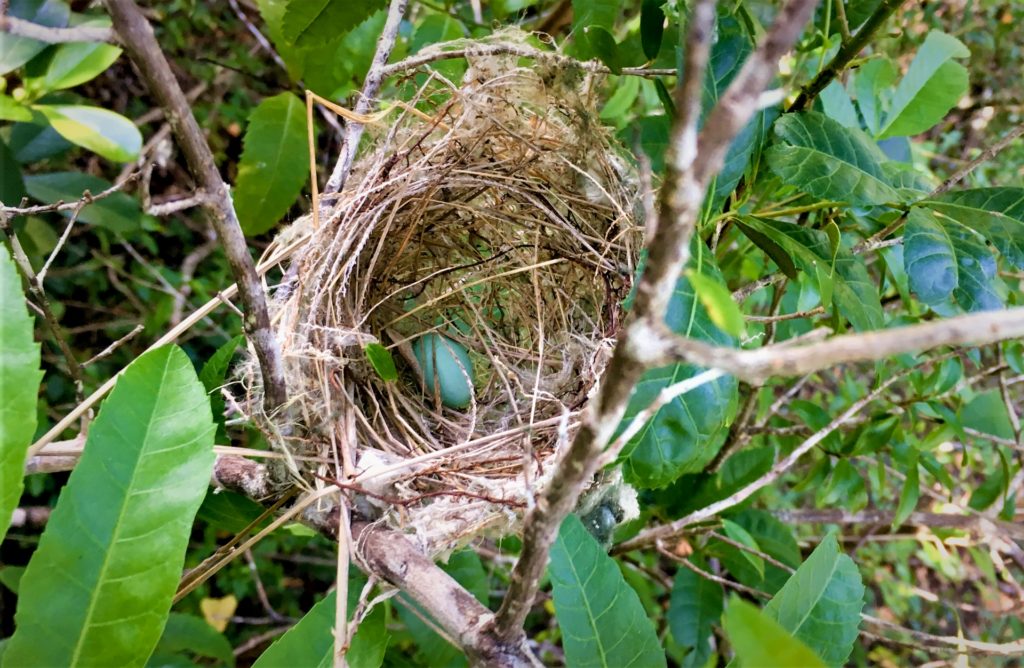 It’s now almost 12 months later and in a matter of days I’ll be returning to Norfolk for my second field season, with the hope of discovering a bit more about this mysterious species of which we know so little. It is a matter of urgency that I do this; Norfolk Island has already lost its only other endemic White-eye species: the White-breasted White-eye. Like the Slender-bill, the White-breast existed only here, in the forests of this 36 km2 rock in the middle of the Pacific.

Though there have been reputable sightings here and there, the White-breasted White-eye was officially declared extinct in 2006. This is but one small drop in the ocean of the Anthropocene’s era of extinction, and may become an omen for the fate of the Slender-bill if we let it.

While it can be hard to escape the sometimes crushing helplessness that often accompanies the doom of current extinction projections, I’ve discovered a way to overcome it. It is, plain and simple, be curious. Be curious about the everyday, the mundane and the normal. Be curious about the fantastic, the strange and the incomprehensible.

Channel your inner child and never stop asking why? Because it is in the why that we discover; it is in the why that we unlock the deep wells of fortitude within us. It is the why, asked by myself and many before me, that brought me to that single Slender-bill White-eye nest, and brought us all one step closer to protecting the precious wild around us.

Amongst other things, Allie is a PhD student at Monash University researching the ins and outs of conservation on small islands inhabited by people. A lover of all things wild, her nature nerdery defies all taxonomic boundaries!