It is autumn. The trees in our local town are vivid with colour: amber yellows, deep burgundy and vermillion. Here on our property the hues of our plains grassy woodland are more subdued, but the paddocks nearby have an undertone of verdant new growth below the dried grass of last season’s pasture. We are enjoying a spell of still days with bright sunshine. The heat of summer is now just a memory and winter has yet to really bite. I always feel that I don’t get to fully enjoy autumn before it slides inexorably away. It is a busy season at the sanctuary and both our hectic display schedule and an influx of injured raptors keep me very occupied.

For as long as I can remember, I have always wanted to feel connected with the natural world, to shrug off my civilised human skin and the complexities of a modern life and to fall into rhythm with the cycle of seasons and the creatures we share our landscape with. Birds of prey have long been my guide and passport into this world. In addition to training our own team of education birds, I attempt to heal the injuries of wild raptors and make them as fit as possible prior to release and then, if all goes well, finally return them to the wild. In exchange they open a window for me, just a crack, so that I may peek through and experience life through the dark-eyed, hitherto unknowable world of a truly wild mind. Although we have always admired birds of prey, watching them in awe from far away, in many regards they remain strangers to us.

Today I stand on our flying field, a small patch of open native pasture tucked away between stands of narrow-leafed peppermint and Yarra gum, waiting for a visitor. I remember when I first saw her, lifting the lid of the basket in which she arrived to reveal the 300 grams of feathered fury it contained. Dark eyes, pitch black in the gloom within, glared up at me in defiance. Although small, she seemed quite prepared to defend herself with her deceptively delicate thorn-endowed toes and hooked beak. She was always a fearless one, from that first moment she arrived until the second when I cut her tethers and gave her back to the wild. She was a female Australian hobby and she had come to me after colliding hard with a glass window, an accident which had left her head badly injured. With the help of anti-inflammatories and some time in care she gradually recovered and her feisty spirit returned. As a juvenile her plumage was a rich brown colour, with chestnut nape and back feathers fringed delicately with pale fawn. Such beautiful rich colours deserved a name to match and so I called her Merlot. 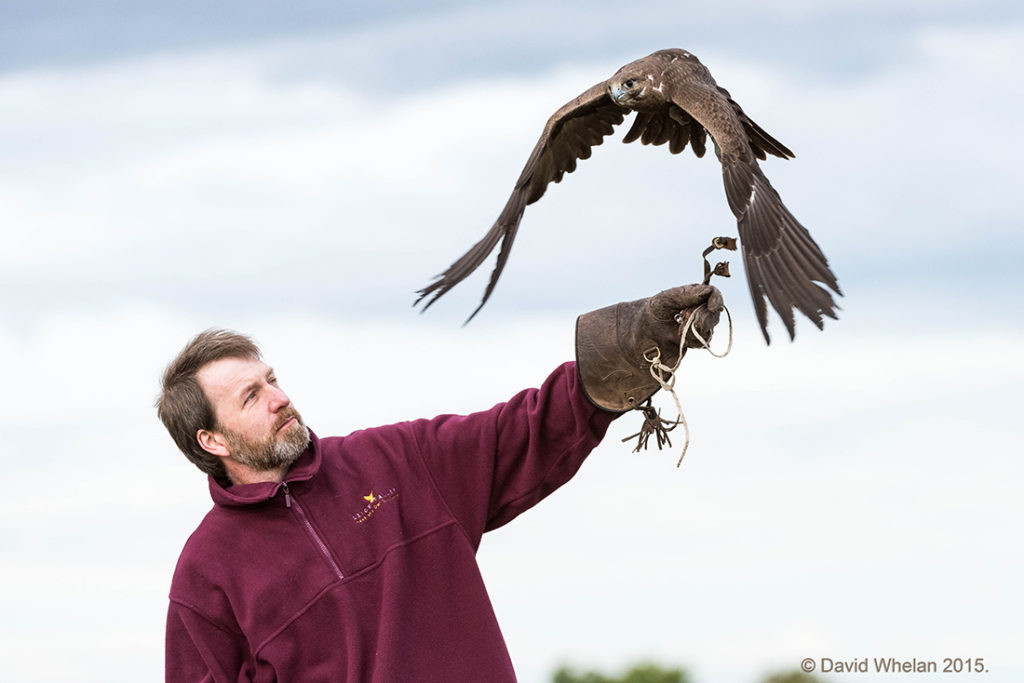 Like many of the birds which are brought to our shelter for care, Merlot’s injuries were sustained as result of our technology and way of life. Looking back through my shelter records provides an insight into the hazards our raptors now face: window collisions, motor vehicle impacts, illegal shootings, barbed wire entanglement and collisions with powerlines. In the records these causes are assigned codes. A ‘60’ means the bird was shot. ‘53’ means found by a roadside, but that the accident was not observed. A ‘21’ means the bird has consumed a poison such as Pindone or rat poison. The codes hide the true horror that one often experiences as a shelter operator – wings nearly torn off by collision with powerlines, exposed fractures that have become infected or flyblown, or eyes that have been damaged beyond repair by blunt force trauma.

Caring for these refugees of our way of life is an activity with enormous challenges. Around half are euthanised, in accordance with state government policy which insists that all injured wildlife that cannot be returned to the wild is put down. Essentially, it is a binary approach to dealing with injured wild creatures where death or release are the favoured options. Only in very rare circumstances are exceptions made and birds retained in captivity. Thus compassion fatigue becomes a factor as one deals out death to birds that appear to be poor candidates for rehabilitation. It is, in essence, a brutal form of triage.

Another very great challenge is how to get recovering birds of prey fit prior to release. These creatures are nature’s athletes; top order predators honed and shaped by millennia of evolution to actively pursue, catch and kill their prey.  ‘[T]he one path of my flight is direct,’ writes poet Ted Hughes, ‘Through the bones of the living.’ But to effectively chase down its prey a raptor needs fitness. Sitting around in an enclosure at a wildlife shelter recovering from an injury is an excellent way to lose the muscle tone that is essential for a predator’s hunting ability. Just like a human athlete who is recovering from an injury, it takes time, physiotherapy and exercise to regain this lost athleticism.

Fortunately, the ancient art of falconry has given us strategies for getting raptors fit. As a sport, falconry has been illegal in Victoria since 1975 when the (then) new Wildlife Act made it all but impossible to keep birds of prey for recreational purposes; however, the techniques are very useful in raptor rehabilitation and for use in educational displays. Although large flight aviaries can be used for some species to provide exercise prior to release, for active pursuit hunting species, particularly bird-hunting falcons, no aviary will ever be large enough. Over the years I have trained 16 peregrine falcons, a number of hobbies and numerous other species to free fly as a form of physiotherapy for rehabilitation following injuries. Of these most have returned successfully to the wild in a high state of fitness. Put simply, there is no place better suited for a raptor to exercise and regain lost fitness than the sky.

This is a process that has not been without its critics in the past. At times, free flying raptors for rehabilitation has been considered to be a ‘toe hold” for falconry – a sport that attracts a surprising amount of vitriol in Australia. But in the words of T.H White, author of The Goshawk and The Once and Future King: ‘falconry is extraordinarily tenacious… like ivy, it finds its way around obstacles and keeps growing,’ and often with good reason. A 2006 study published in the Journal of Avian Medicine and Surgery, by three authors connected with Healesville Sanctuary, found that the use of falconry methods significantly increased the likelihood of survival in rehabilitated peregrine falcons and brown goshawks released back into the wild. Birds which had only been aviary exercised either lost weight or had died in the weeks following release. The falconry-trained birds released in the study, with only two exceptions, had gained weight or could not be recaptured.

Whatever we think of it now, this ancient art form long predates our informed era of modern sensibilities and research science. Falconry can be traced 5000 years into our past. Early evidence suggests an eastern origin of around 3000 BC. At this time the first Stonehenge monoliths were being levered into place, the first urban civilisations were being established by the Sumerians in Mesopotamia and pagan high kings were being laid to rest in their earthen tombs on the hill of Tara in Ireland. In this period of cultural metamorphosis falconry evolved, grew in popularity and spread. When Alfred united England, falconry was gaining traction and the bells of favourite falcons and hawks were finding their way into the grave goods of Norseman and Saxon alike. Being a part of such a long tradition is a pleasant undertaking. My aims may be different from those of my ancestors – to help a broken falcon or hawk achieve its peak potential in the air and to return to the wild – but I feel that the old hawk masters of bygone eras would have approved. 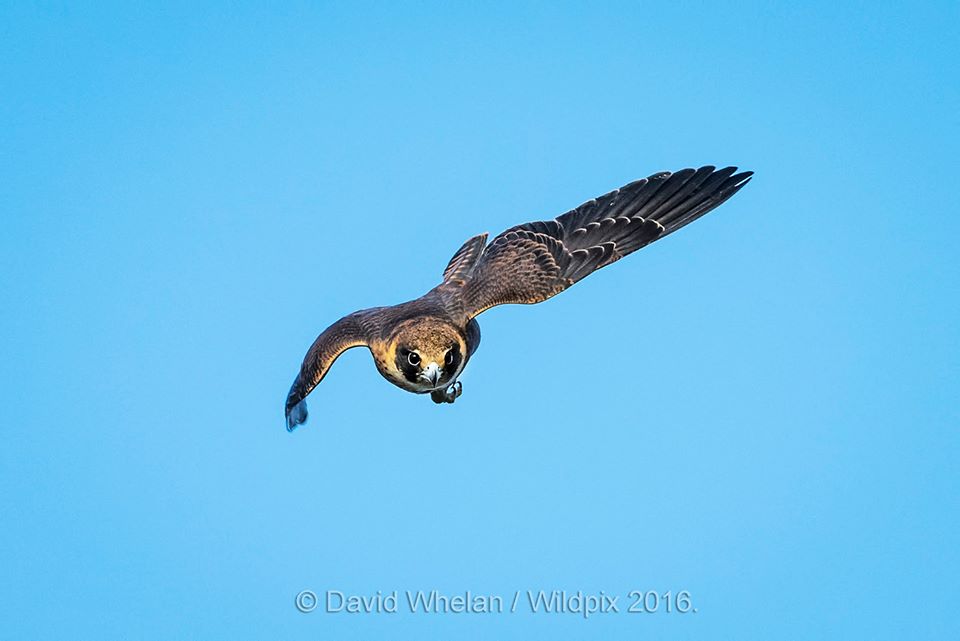 So, my little head-injured Australian hobby, once sufficiently recovered, was fitted with leather tethers known as jesses, by which a falcon is restrained during her period of training. She was then tamed or ‘manned’. (Note: this is quite reversible, for once a falcon is fit and free her training is soon forgotten). Her weight was logged daily, for she was to be become an elite athlete and had to be treated as such. Too lean and she would lack strength; too fat and she would not be motivated to chase ‘prey’ in the form of an artificial lure.

Merlot was a fast learner and I had her flying loose and returning to a swung leather lure in around three weeks. Each day I carried her to the flying ground and turned her loose. Exploding from the glove in a blur of furious pinions, she would power up above the tree line on her angular, rapier wings and begin to circle, tracing effortless helixes in the breeze above me, her outer flight feathers at full stretch, fletched with perfect mottled primaries backlit by the early autumn sunlight. She knew this game. As soon as I produced the lure she seemed to fold up, wings pulled into her body as she fell into a stoop, slashing at the leather lure as she whipped past me with an audible swish of feathers that I could hear but could not follow with my weak human eyes. By the end of her sessions, she had made perhaps twenty or thirty passes at the lure and flown hard in and out of trees and back and forth across our property.

Soon afterwards Merlot was released at ‘tame hack’, meaning that she was now at liberty to come and go as she pleased. For the first few weeks she stayed close to home, perching on our television antennae and chasing the local crimson rosellas, which she seemed to delight in tormenting, although they were too big for her to catch. When she failed to catch prey for herself, I was able to whistle her in to the flying ground for a daily meal.

Now it is late autumn and her visits have become spasmodic. She is gaining independence. Soon she will be wild again and the task complete. Like the line from Shakespeare’s Othello, she had been whistled off and let ‘…down the wind, to prey at fortune’. I hope she keeps away from windows this time!

Martin Scuffins is the director and raptor handler at the Leigh Valley Hawk and Owl Sanctuary. www.hawkandowl.com.au