Think of 450 million years as a 24-hour clock. Before you finish this article, 166 seconds, or just under 3 minutes,  of those 24 hours has passed. That’s how long – actually, how fast – it’s taken for an estimated one quarter of all elasmobranch (sharks and rays) species to be threatened with extinction.

Since the dawn of industrialised fishing around 100 years ago (hence the 166 seconds), one of the largest and most diverse extant vertebrate groups on Earth has been heading along the path to extinction. Overfishing is the primary driver of their rapid decline because like ourselves, elasmobranchs are slow to mature, they give birth to relatively few young and are long-lived. Put simply, the rate at which we are taking them out is considerably faster than what their populations can replenish.

Elasmobranchs are often caught incidentally and because of their relatively low economic value, are thrown back (‘bycatch’) in favour of more valuable or specifically targeted species. Unfortunately, even if they survive the experience of capture, survival is not guaranteed and the lingering effects from the stress of capture may affect aspects like growth and reproduction. Globally, fisheries recognise the critical challenge of developing sustainable fishing and the conservation of elasmobranch species. The question we have to then ask ourselves, is how can we fish, only take what we need (personally and commercially), whilst minimising the impact on elasmobranch populations? 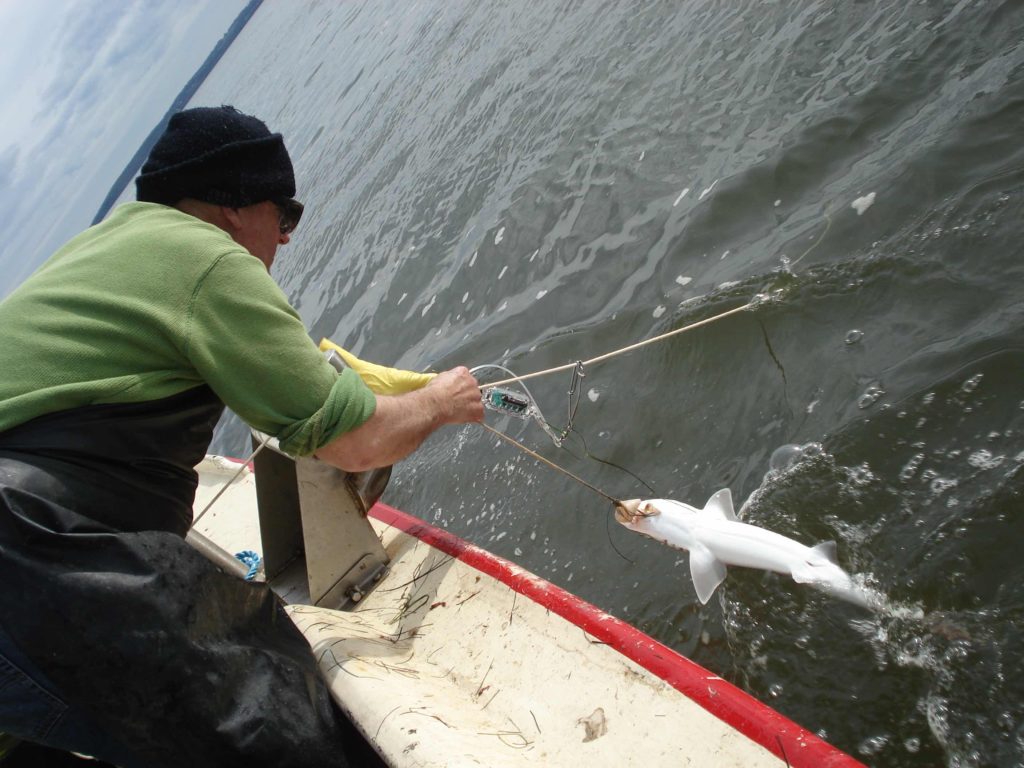 Examining the stress response to capture provides important insights into a species’ likelihood of survival and also any potential sub-lethal affects. What is it about capture that imposes stress on an elasmobranch? For a moment, imagine how you would respond to intense and prolonged activity like football, soccer or tennis – you can’t seem to get enough oxygen, your muscles burn with lactic acid and recovery can take days. For elasmobranchs it’s essentially the same – fighting against capture lasting several hours, the exhaustion of muscles and a restricted capacity to breathe because movement is limited.

Like sports scientists, researchers measure capture stress by extracting blood and muscle to quantify changes in metabolites (e.g. lactate, glucose) and biochemical properties (e.g. electrolytes, pH). Quantifying stress hormones would be ideal; however, as yet there are no reliable techniques to do this for elasmobranchs. Nonetheless, using current stress indicators we’ve been able to identify which species are less tolerant than others to capture and importantly, what measures can be taken to create and improve sustainable fishing practices. 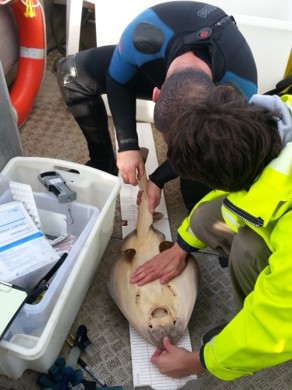 Not all species are built equally. At one end of the spectrum, hammerhead sharks (Sphyrna spp.) are among the most sensitive to capture, with death often occurring within just a few hours of capture. On the other end of the spectrum is the Port Jackson shark (Heterodontus portusjacksoni), which can not only survive several hours of capture but will also survive several minutes of out of the water!

The capture method itself has significant bearing on the survival of elasmobranchs and is largely determined by the degree of restraint imposed. Species caught on longlines (which can be kilometres in length with thousands of hooks attached) generally have a higher chance of survival compared to gillnets (fish are caught as they pass through the net) and trawls because there is some degree of movement allowed.

Whether we catch elasmobranchs during warmer or colder periods of the year is also likely to influence their ability to survive capture. With exception to the lamnid sharks – a family made of the white (Carcharodon carcharias), mako (Isurus spp.) and porbeagle (Lamnus spp.) sharks – the body temperature of elasmobranchs is determined by the surrounding water temperature. Consequently warmer water can increase the amount of capture stress experienced because the animal can respond to capture more vigorously and as such also needs more oxygen to support a higher activity level.  However, how the animal breathes and behaves during capture is equally important. For example, although warmer waters can increase the activity level of a gummy shark, it can limit the stress it experiences because it can still breathe while resting during capture on a longline.

Even if released alive, survival isn’t guaranteed. Laboratory studies and satellite tagging of wild-caught sharks have shown that death can occur anywhere from minutes to days following release. The exact physiological causes of death from capture stress are not known, but not being able to fully recover may result in organ failure, and impaired muscle function might limit the ability of the animal to breathe or escape prey. Just think of how stiff your body can be a day or two after intense exercise…

Let’s say the shark or ray does survive capture. Now consider this, what if it was pregnant when it was caught? Reproduction is crucial to population sustainability but how the acute stress of capture influences reproductive success is poorly understood. Like in other vertebrates such as ourselves, we’ve recently learnt for the first time that capture stress during pregnancy in the southern fiddler ray (Trygonorrhina dumerili) can reduce offspring size and also affect maternal condition. This is important because smaller and lighter offspring tend to be more vulnerable to predation and may experience reduced growth. A reduction in maternal condition may also influence reproductive success in the next mating bout, which for many species occurs once per year. Although it’s difficult to determine, the worst case scenario for some populations could mean not just high fishing mortality rates, but an affected capacity to reproduce successfully. 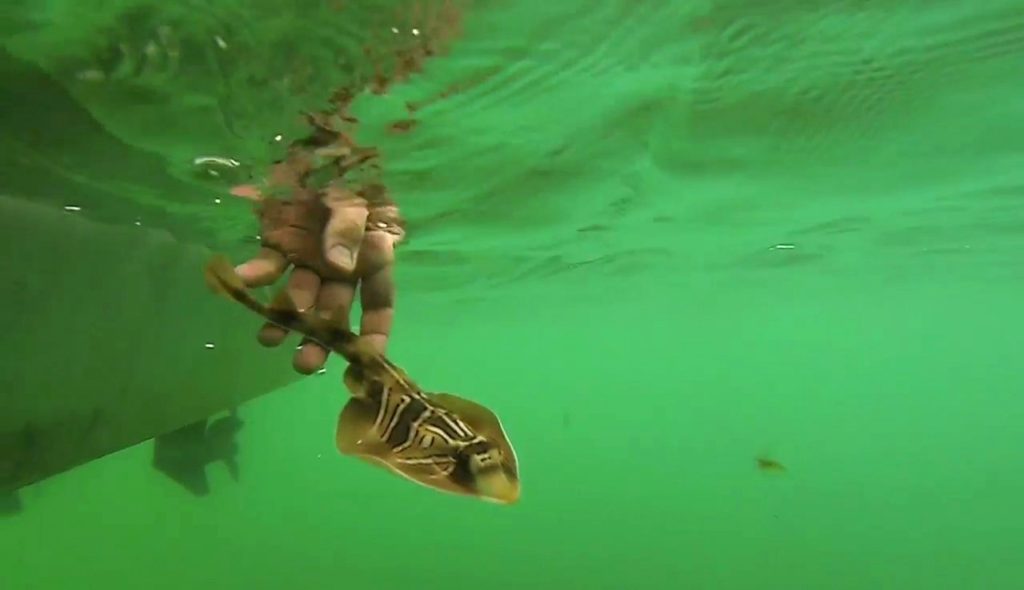 With all that we know so far, how can we better manage our fisheries to ensure sustainable practices and appropriate conservation measures for elasmobranchs? Fortunately, there are several options. We can identify ideal capture durations that limit the stress experienced but maximise fishing effort; we can identify vulnerable species and limit fishing in regions and depths where these species are common; and we can impose seasonal closures in certain areas to allow species to reproduce with minimal interference.

Changes to fisheries management have resulted in positive outcomes for elasmobranchs. For example, stock assessments and increased understanding of the responses to capture in the gummy shark have allowed it to now be classed as a sustainable fishery in Australia. Significantly more work is required for elasmobranchs in general and proposed changes are by no means simple or easily implemented. However, with greater public awareness, research, appropriate consultation and legislation, we’re on the right path to a brighter future for our elasmobranchs and our oceans.

Following a childhood love for sharks, Leo completed his PhD at Monash University investigating the effects of fishing on shark and ray populations. He is a former Community Operations Director for Remember the Wild.