Every summer, we always seem to be caught off guard.

For those of us in southern Australia, maybe those long preceding months of grey sky and rain soak in a deep sense of complacency that fades our memories, like a long-lost tan. But our senses can be easily stirred by the familiar smell of burning eucalypt leaves, and the uttering of that uniquely Australian word that describes what is otherwise a global phenomenon – bushfire.

When it comes to our summer bushfires, we are certainly aware of the human costs. We could almost fill a whole week in commemoration of bushfire tragedies – Red Tuesday, Ash Wednesday, Black Thursday, Friday, Saturday and Sunday.

While we rightfully mark our calendars to remember those sorrowful days, how much time do we also devote to considering how our wild landscapes cope with the periodic spectre of bushfire?

While bushfires are often popularly portrayed as a purely destructive force, they have been an intimate part of the Australian landscape for tens of thousands of years. Indeed, as the Australian continent inched northward over the millennia, the resulting aridification of the land gave our eucalypts, banksias, hakeas and melaleucas the chance to unfurl from the edges of the grand Gondwanan rainforest while, concurrently, the land become saturated with charcoal from increasingly prevalent bushfires.

Such a very long engagement with fire means our biota have developed unique strategies and adaptations to mediate a relationship that would otherwise be hostile. Our ubiquitous eucalypts are but one example of our flora that has not only learned how to tolerate fire, but sometimes seems to benefit from it.

One month after fire in stringybark forest (left); and one year later (right). Images courtesy of Tom Fairman.

Many of our most widespread eucalypts (such as messmate stringybark, which grows from the wet forests of Tasmania, and northwards until it peters out in small pockets in Queensland) are globally unique in that they have deeply buried buds under thick, fibrous bark which insulates and protects them. After fire removes the canopy, these dormant buds are activated and the tree develops its ‘emergency’ secondary canopy. This enables the tree to quickly recommence photosynthesis, and hence attain the energy it needs to survive. From a competition point of view, it also allows the tree to retain its claim on the spot in the bush it fought hard to win

Other species take a different approach. The mountain and alpine ash forests found in southern Australia are among the tallest in the world, and are vital habitat to a range of species. Growing in cooler and wetter conditions, fire is more unfamiliar to these forests – returning once every century or so. After fire, the mature trees are killed due to their thin bark being unable to protect the trees’ vital organs. But with the understorey cleared and soil sterilised of fungus and ants, billions of tiny seeds rain down from the trees to the soil, and within mere months millions have germinated. A new forest then begins to grow, reborn amidst the skeletons of its forebears. 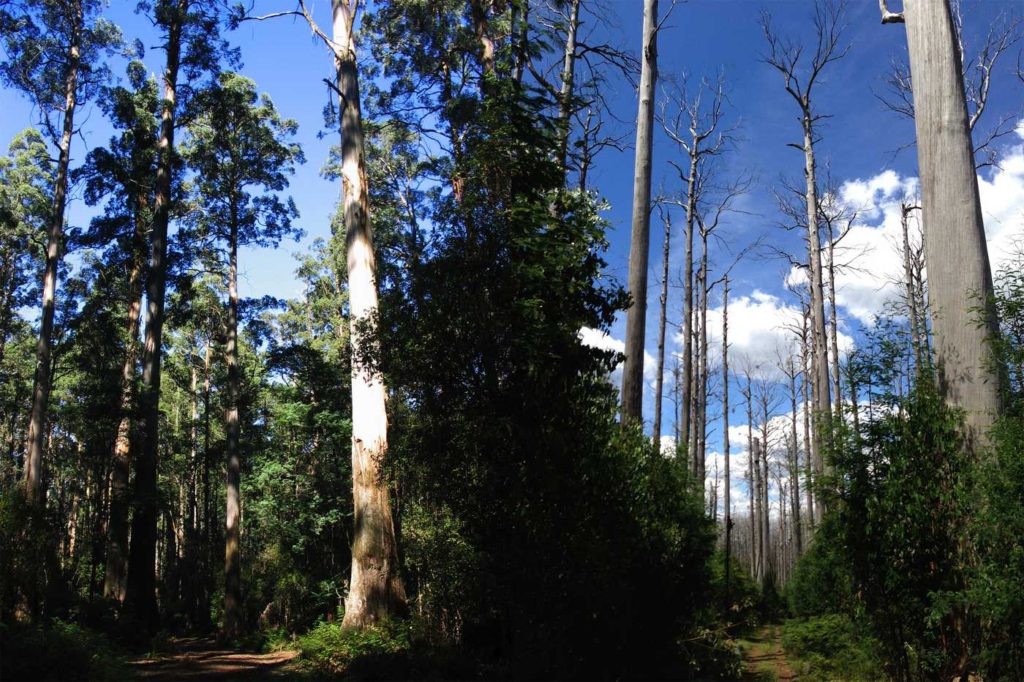 Wallaby Creek, a 300 year old mountain ash forests, in 2006 (left) and 2012 (right). This forest was burned in the 2009 Black Saturday bushfires. Images courtesy of Tom Fairman.

These adaptations have allowed these forests to live with fire for thousands of years. But, it is important to remember that they are built on a tolerance to certain types of fire. Fires happening at the right time of year; the right intensity; the right frequency. Malcolm Gill, the eminent Australian fire ecologist, termed the grouping of these fire features as the fire regime. If one of these factors begin to drift, then the tolerance may begin to be tested.

One prominent example of this is from those ash forests. While these forests are regrowing after fire, for nearly 20 years the seedlings are unable to produce their own seeds. These enthusiastic youths are just too excited trying to grow taller than their mates. The risk here, then, is that if a fire burns through during this period, the forest becomes locally extinct. No seeds – no seedlings – no future for the forest. 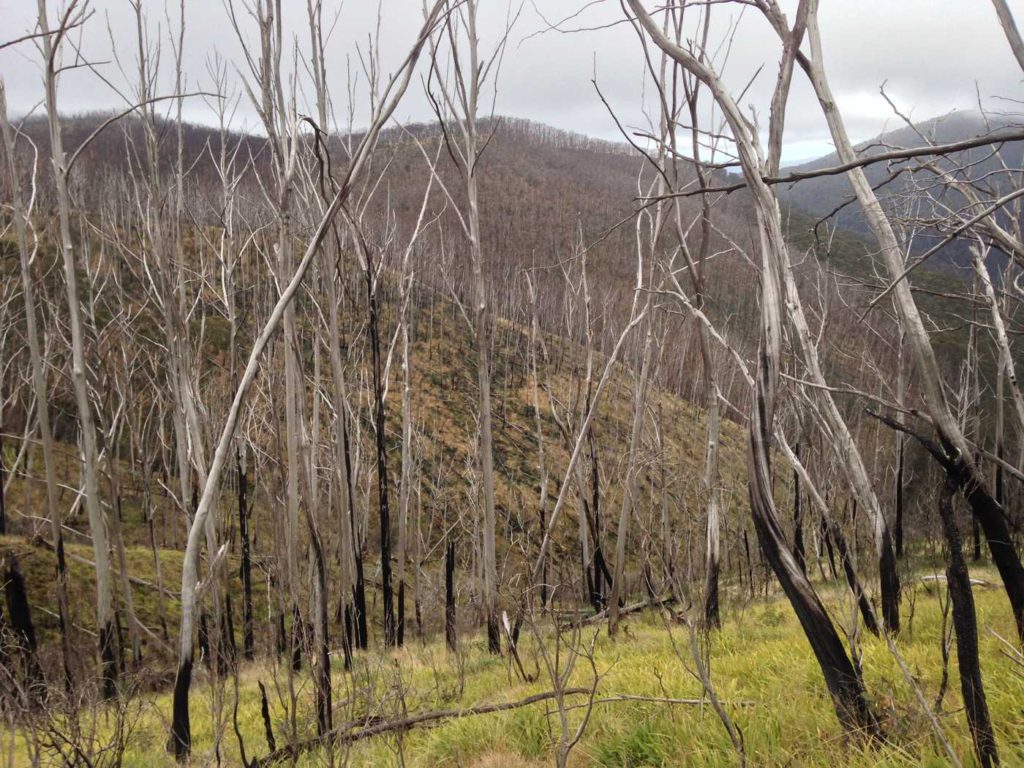 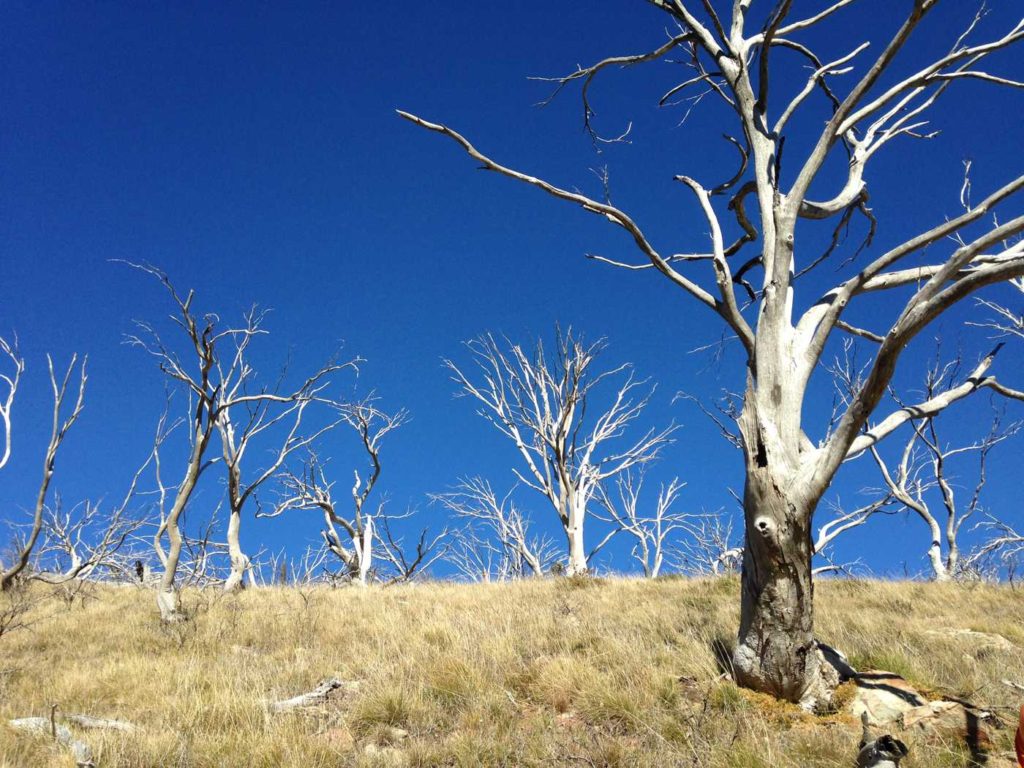 That’s the theory. And in reality, it’s already happened. In Victoria, four million hectares of forest has burned in multiple bushfires since 2003, and about 7,000 football fields of alpine ash were burned repeatedly. In the blink of an eye – at least from a forest’s perspective – these areas went from forest to grassland.

There are also historic examples of such impacts, though you have to look harder to find them. The Black Spur near Fernshaw in Victoria is a popular tourist destination owing to the walls of spectacular mountain ash that hug the winding road. What few know is that this area was burned by both the 1926 and 1939 bushfires, which denuded the area of regenerating forest. The foresters of the day hand-planted the slopes with mountain ash seedlings – an act of long-term thinking we benefit from today. 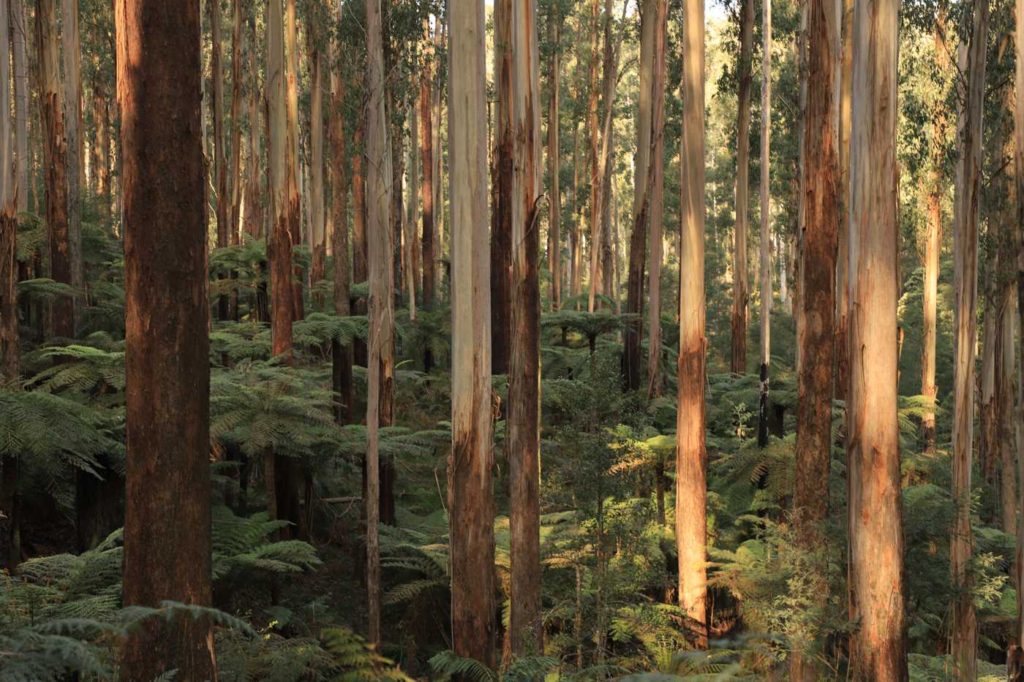 The stunning ash forests around Fernshaw, Victoria. Sections of this forest were replanted in the 1940s following recurrent wildfires which killed the adult trees and the regeneration. Image courtesy of Jo Hunter.

But what about our stringybark forests? Are they as vulnerable? Resprouting certainly appears to make them less so, but we are beginning to learn that there may be limits to their tolerance. Snow gums, which grow at the top of most mountains in Australia, resprout from a lignotuber, which is a large basal swelling which stores energy reserves. We’ve observed that after very frequent fires – as much as three in a decade – half of all snow gums in our research plots died. For a tree that is otherwise considered to be very resilient to fire, this is of concern – especially so when we consider that fires may become more frequent with climate change.

So while the Australian flora has been forged in fire and the two have been intimately entwined for thousands of years, the future of this relationship remains uncertain. Understanding our forests’ tolerances – and vulnerabilities – will mean we can better conserve and protect them in perpetuity for future generations. At the very least, if we approach each coming fire season remembering fire’s long history in our landscape, as well as the adaptations our forests have made to fire, then perhaps we will be a little less caught off guard when the smell of burning eucalypt leaves arrives on the summer wind.

Tom Fairman is a forest ecologist completing his PhD on the impacts of frequent bushfire on south-eastern Australia's temperate eucalypt forests at The University of Melbourne - though truth be told, he mainly uses forest ecology as a good excuse to go on some really cool bushwalks.

Has the medical potential of Eucalyptus oil yet to be unleashed?

Gardens and farms for gum trees: saving our threatened eucalypts one property at a time

This website uses cookies to improve your experience while you navigate through the website. Out of these, the cookies that are categorized as necessary are stored on your browser as they are essential for the working of basic functionalities of the website. We also use third-party cookies that help us analyze and understand how you use this website. These cookies will be stored in your browser only with your consent. You also have the option to opt-out of these cookies. But opting out of some of these cookies may affect your browsing experience.
Necessary Always Enabled

Any cookies that may not be particularly necessary for the website to function and is used specifically to collect user personal data via analytics, ads, other embedded contents are termed as non-necessary cookies. It is mandatory to procure user consent prior to running these cookies on your website.