The natural world is truly glorious in its diversity, and in the complexity of relationships between its many millions of species, and the environments in which they live. I was lucky enough to immerse myself in this wonder recently, while snorkelling on Heron Island with my family. The kaleidoscope of colours and chaos of movement I saw as I drifted over countless different fishes and corals was truly breathtaking. But they also inspired reflection.

How well do we account for complexities in natural systems, and to what extent are our management approaches potentially contributing to the dire situation countless species and ecosystems find themselves in? It’s a bit of a running joke with many of my colleagues that ecology isn’t rocket science… it’s much harder. But jokes aside, if we’re honest with ourselves, the application of our field’s scientific knowledge hasn’t progressed environmental management and nature conservation to the degree we would have liked.

To illustrate my point regarding the importance of recognising and accounting for complexity, let’s examine the current and typical management of dingoes, foxes, feral cats, kangaroos, and fire, across a large area of mainland Australia.

Invasive red foxes and feral cats have ravaged much of our wildlife, and are implicated in the extinction of numerous native mammals. For this reason, cat and fox populations are actively controlled in many areas. Notably, there is currently a prominent government-sponsored program to tackle feral cats, with the stated aim of killing two million cats by 2020.

Some of Australia’s iconic large kangaroo species have profited from post-European land use change, through land clearing that has created more grass and increased water supply. Additionally, due to livestock loss, the main predator of kangaroos, the dingo, is suppressed. The result is overabundant kangaroo populations, particularly in southern and eastern Australia, and they are periodically culled in some cases. These culls are highly contentious to say the least.

One problem with these actions is that they often occur in isolation from each other, with little regard for how one might affect the outcome and success of another. Research suggests cat and fox control can be ineffective at large geographic scales and through time, unless considerable effort and resources are applied long-term. But even more challenging is the fact that where fox control has been very effective it has been associated with an increase in cat numbers and activity in some areas. Perhaps in some instances we may be better off leaving foxes alone in order to let them control cats for us, given how hard the latter is to manage. Some might consider such an idea conservation heresy.

What can naturally control fox and kangaroo populations? Research in a number of different ecosystems suggests dingoes can do a pretty good job in this regard, but like everything in ecology it’s complex, and depends where and when. As mentioned before, dingoes are actively controlled or excluded from many parts in order to protect livestock, especially in sheep-grazing areas.

The picture I’m painting is already complex, but we must also consider the added effects of fire. Fire is definitely required in certain ecosystems at certain times. But when applied, it consumes vegetation, typically reducing structural (habitat) complexity and encouraging grass growth. Reduced habitat complexity can mean cats and foxes can find and kill native prey such as bandicoots more easily, and more grass may mean even more kangaroos. More kangaroos may also mean less habitat complexity, as their booming numbers and overgrazing suppress vegetation recovery post-fire. But, the extent to which this occurs could be mediated by the presence or absence of dingoes, as they can also locate and kill cats, foxes and kangaroos in burnt landscapes. Dingoes could therefore dampen the effects of invasive predators and herbivores on ecosystems and biodiversity. 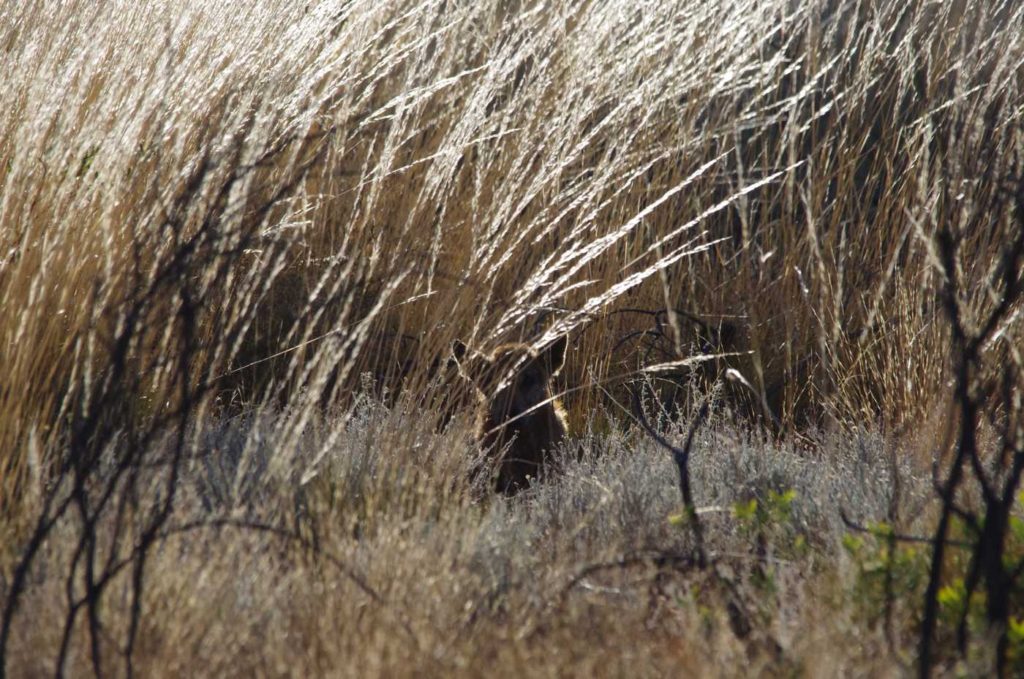 So what does this all mean and how could we do things better? In short, we need to work with, not against, nature a lot more. Maintaining a top predator, such as the dingo in landscapes could help manage our issues with smaller predators such as cats and foxes, as well as keep a lid on herbivore numbers. And, if we apply fire in a way that maintains more habitat structure, we may further reduce the exposure of smaller native animals to predation.

But how do we manage conflict between livestock producers and dingoes? There are better solutions for this too, such as using livestock guardian dogs to protect sheep.

Finally, we must also take greater advantage of existing opportunities to learn. Where fire, and pest or wildlife control is currently being applied in the same areas, with more forethought these actions could be more frequently applied in an integrated, experimental fashion. Monitoring the short- and long-term outcomes of experiments would allow us to answer important ecological questions regarding species interactions and the role of disturbance such as fire.

Euan Ritchie is a Senior Lecturer in Ecology at Deakin University. He applies ecological theory with good doses of field work to seek solutions to the challenges of conserving biodiversity.