The state forest around Bailieston in Central Victoria consists of acres of Box-ironbark and other Eucalyptus trees. Their leafy canopies offer shelter from wind and rain to resting birds. With strong competition for water and sun, young trees produce a narrow trunk reaching towards the sunlight. Older, established trees have broader trunks and far-reaching branches, and bear the clumps of cascading mistletoe in light, golden shades of green, evidence that Mistletoe Flowerpeckers, or Mistletoebirds, inhabit the area.

An array of spindly Sifton Bush and lustreless Parrot-pea shrubs dominate the dry and rocky undergrowth and are home to little spiny spiders that anchor their cobwebs between adjoining bushes. Intricately woven webs not only trap insects but also catch tiny moisture droplets that glisten in the early morning sunlight. A much larger spider, the Golden Orb Weaver, creates its web in the branches of the Eucalyptus trees. The delicate structure stretches at least one metre from one branch to another, a string of flying insects becoming entwined in its strands strong enough to trap small birds. Care is essential when strolling through the bush so as to not disturb these intricate webs.

Dead tree branches litter the forest floor. But it’s the aged tree stumps that transform it into an outdoor gallery, exhibiting sculptured works of art created by resident termites and the eroding climate. A pale green moss clings to these masterpieces, adorning them with a semblance of softness, and heralding the purity of air in the environment.

Many years pass before these old grey logs break down completely, their once stately trunks reduced to nothingness, unlike the younger tree trunks which seem to decay at a much faster rate. 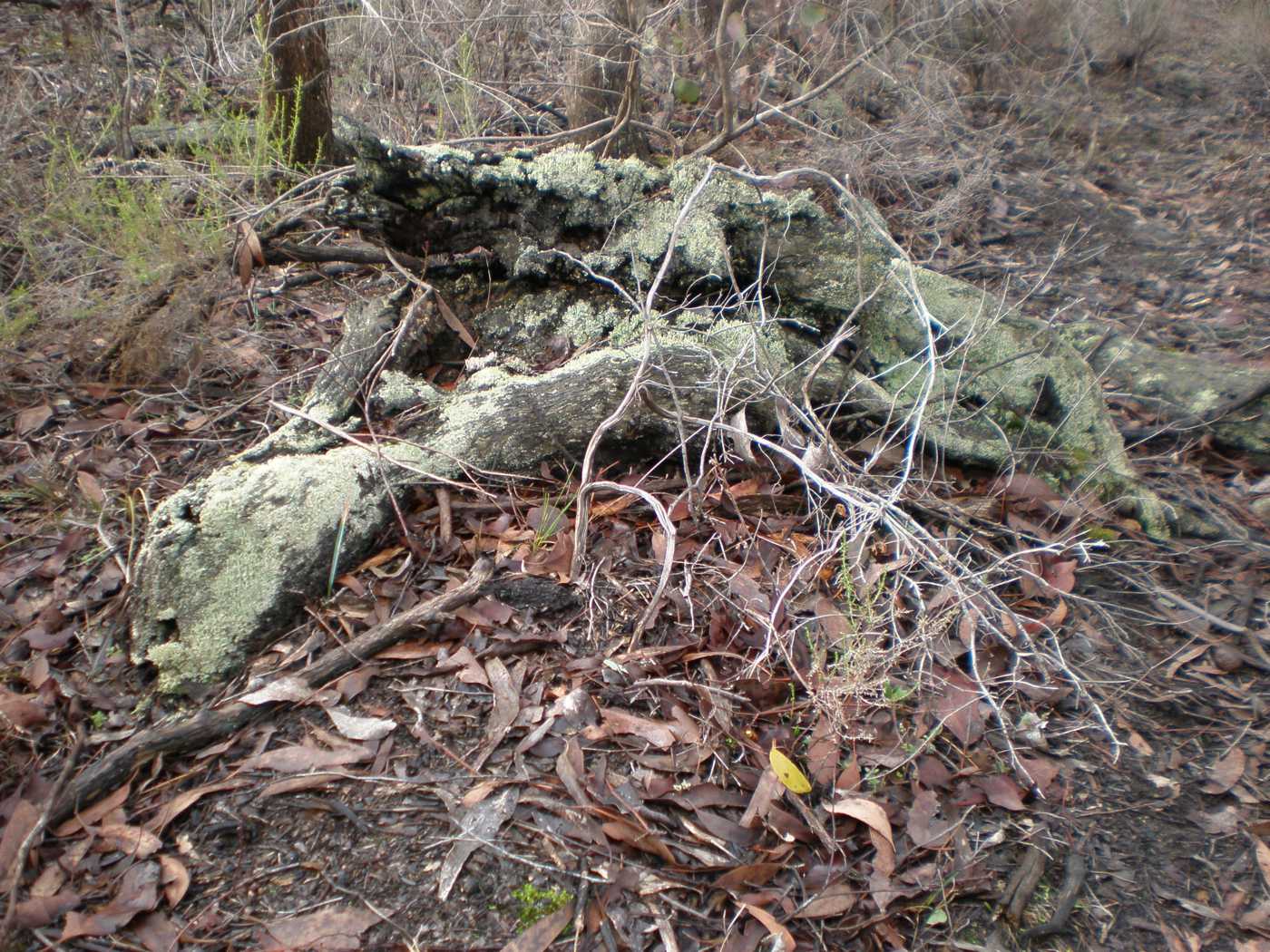 A dry creek bed shows evidence of flooding from previous winters by the leaf litter and rubble banked up against fallen logs across its path. Mullock hills scattered in parts of the forest, abandoned by gold mining prospectors, warn hikers of the mining pits that lie alongside them, some being dangerously deep.

In cooler months, there’s an emergence of green moss and clumps of lichen where grasses don’t grow. The texture of the lichen feels soft and spongy in the hand. Regular rainfall brings colour back to the leaves – colours that may have been bleached away in the hot summer sun. And pink and white eucalypt blossom that speckle the tree tops.

But there is greater merit in wandering through this forest with its rocky ground and hardened soil.

It’s the peaceful silence, broken only by the chirping and whistling birds flittering through the tree canopy. Birds like rosellas, parrots, cockatoos, whistlers and honeyeaters, to name a few. Some species dare to linger and observe the hikers wandering through their territory. One of my favourites is the Yellow-tufted Honeyeater. Its curiosity towards intruders and its fleeting behaviour when searching out insects make it an interesting bird to observe, as is the little Spotted Pardalote when stripping bark from young stringy bark trunks. The Red-capped Robin is also one that likes to know who or what is wandering through its habitat. When it comes to singing birds, the Golden Whistler always draws my attention. 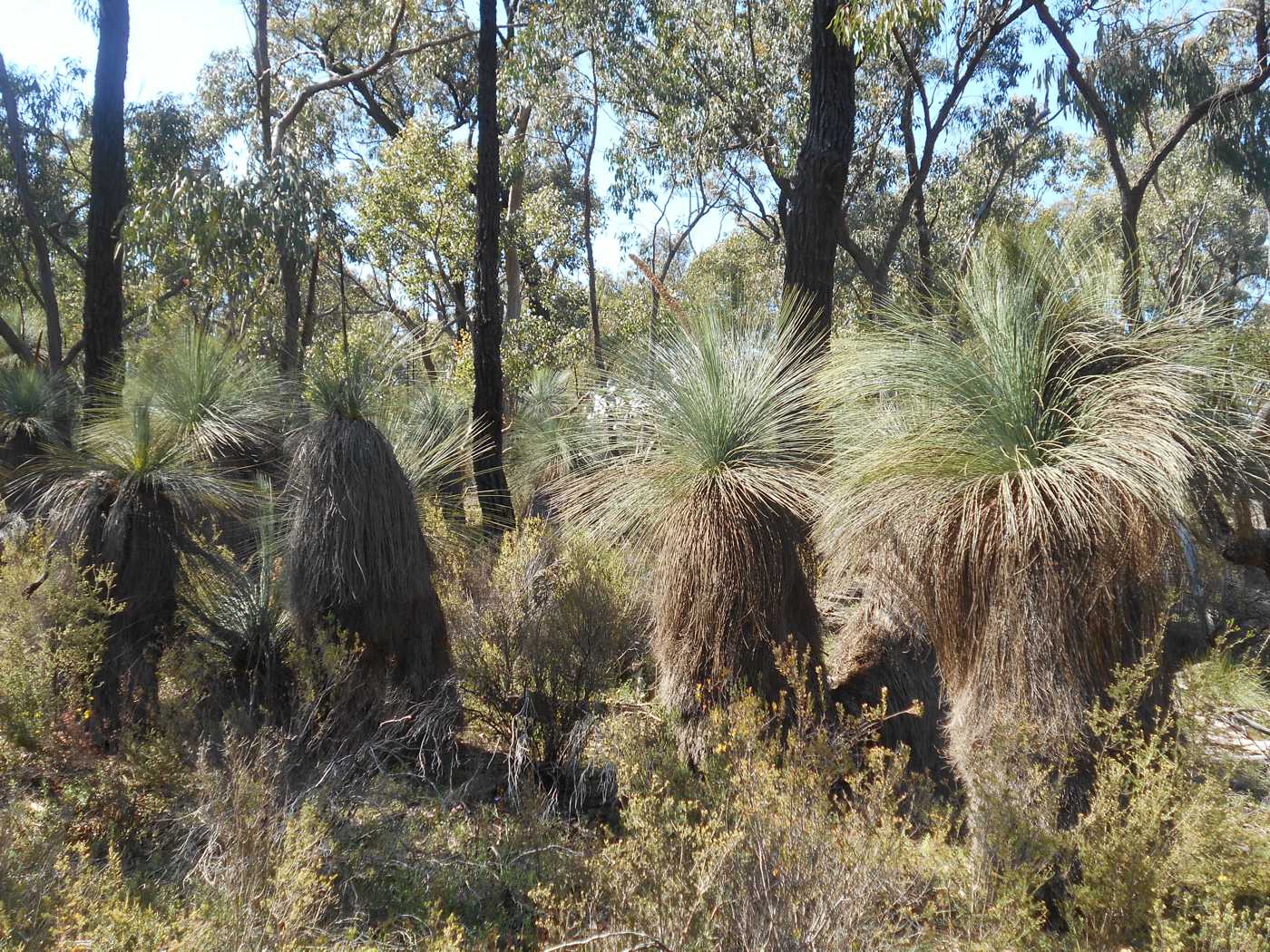 And there’s the chance of walking into a large patch of the awesome Xanthorrhoea, a tree that exists in stark contrast to the bushland in which it grows.

Otherwise known as grass trees, there are around 28 species of these native marvels in Australia, some of which can grow to six metres in height and can live for up to 600 years. Xanthorrhoea australis, Xanthorrhoea glauca and Xanthorrhoea minor are found in coastal bushland and extend inland in the south-eastern regions, including Tasmania, South Australia, Victoria and New South Wales. Xanthorrhoea preissii and Xanthorrhoea brunonis are found in Western Australia, whilst Queensland boasts around six species. But only one grows in the Northern Territory: Xanthorrhoea thorntonii, or the Desert Grass Tree, which only grows to two metres.

These wonderful trees produce green, needle-like leaves that sprout upwards and arch over the trunk’s sides. The leaves themselves grow to one metre in length. Eventually they die back and in their natural environment, remain attached to their black trunks, giving a thatched appearance. I like to call them grass skirts. Skinks, small lizards, snakes, spiders and other living creatures seek shelter within and beneath these canopies.

Xanthorrhoea’s black trunks become exposed in the wild only if fires ravage the forest and burn off the dead foliage. Their flowering spears are more prolific after such fires. The long brown flowering stalk or spear can grow two to three centimetres a day and can reach a height of up to three metres. A dense cover of attractive yellow flowers encompasses the entire spear and provides a rich nectar to a variety of honeyeaters, bees and butterflies that find them irresistible. When the flowers die back, the stalks eventually collapse, scattering seeds across the ground. It is encouraging to find a show of thriving young shoots while strolling through this delightful outcrop.

The plant has many uses. According to Plant Diary: Balga Grass Trees, the Noongar people in the south-west region of Western Australia named the Xanthorrhoea the Balga Grass Tree. They collected its nectar and made a sweet drink by soaking the flowered stem in water. The soft bases of young leaves were eaten as a vegetable, while people in the Port Lincoln area in South Australia added its roots to their diet.

The tough leaves and the edges of seed pods could be used as knife blades, while tall brown flower spikes made ideal spear shafts. They were also useful as a base for starting a fire by spinning a stick in a groove carved out on its surface. The little star-like stalks from where the flowers emerged make good kindling for fires once the flowers died off. Tiny clumps at the base of old leaves contain a resin and can be used as an adhesive or lacquer.

What is fascinating about these extraordinary trees is that they only grow one to two centimetres per year, so a one-metre tall tree could be around 75 to 100 years old. This makes some of the trees in the area where I walk at least 200 years old. These ancient wonders can also be traced back to when Gondwana was a continent. 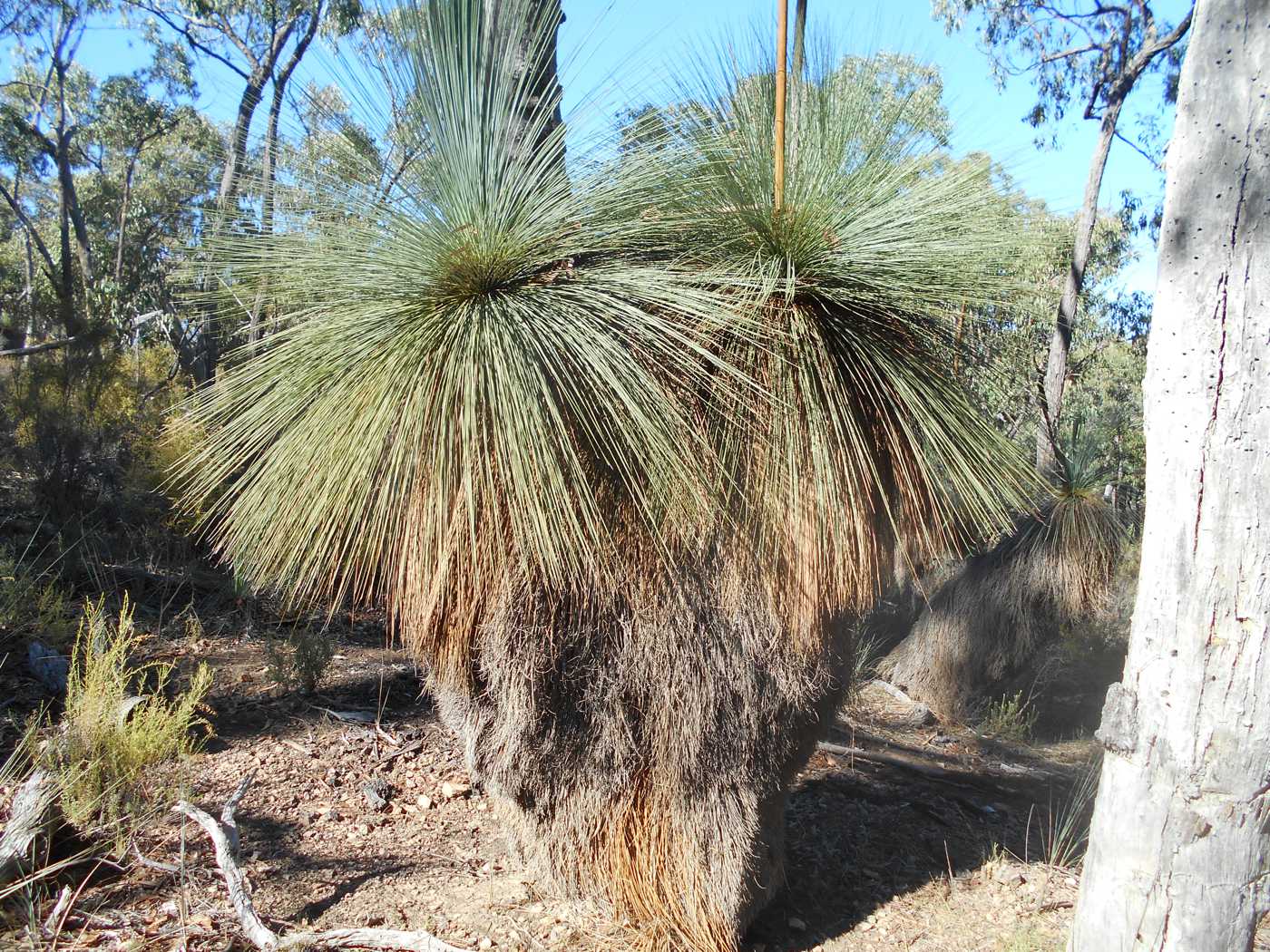 Commercially available Xanthorrhoea are grown under licence, each one registered with its individual number. With their black trunks exposed, these marvellous specimens create an attractive feature in a structured landscaped garden.

Removal of plants and logs from national state forests is illegal, and Xanthorrhoea is no exception. They are unlikely to survive without proper care if removed from their natural habitat.

In contrast to the plants I see in the bush, I have a very young Xanthorrhoea minor in a pot, grown from seed at La Trobe University. On the surface, it appears to be thriving in exactly the same manner as other species. However, its leaves never rise above ground level as its trunk grows underground. This means I will never enjoy the splendour of a black-stumped Xanthorrhoea in my garden, but I wait in quiet anticipation as it does produce flowering spears. As it is only two years old, I may be waiting for some time.

All images courtesy of Bruna Costa.

Bruna Costa has worked in kindergartens for 26 years, and currently works with a 3-year-old group. She is a member of Write Track Writers' Group in Box Hill, and enjoys bird-spotting in bushland and her local area.