In her second publication, illustrator and author Sami Bayly invites you to look at (but don’t touch!) some of the strangest and deadliest animals that walk our earth.

Sami found great success with her first book, The Illustrated Encyclopaedia of Ugly Animals, sharing the true beauty of conventionally unattractive creatures with her readers. When choosing the concept for her next book, she was intrigued by the idea of exploring the fascination of dangerous animals. Conscious of how dangerous animals are often villainised by the public, she wanted to use her platform to highlight the evolutionary beauty in these creatures, and explain to children and adults alike the function of these bizarre adaptations and the purpose they serve to the animal’s survival. Thus, the Illustrated Encyclopaedia of Dangerous Animals was born.

Sami uses watercolours to bring her deadly creatures to life on the page. The artist and author will take delight in her illustrations, finding particular enjoyment in the addition of fine details with her tiniest brush. The small, hair-like projections from a spider or bee that are invisible to the naked eye are showcased in her paintings, giving readers a fascinating new perspective on animals they may have previously cringed at.

Sami was careful in her selection of ferocious animals, wanting to avoid stereotypically ‘dangerous’ animals that are often misunderstood and mistreated. A lack of understanding or propagation of sensationalised information can have serious repercussions on how humans value certain species, such as the labelling of great white sharks as killing machines despite being a species vulnerable to extinction.

Instead, Sami wanted to draw attention to lesser-known dangerous creatures, such as the ‘toothy’ Goliath Tigerfish. She also includes creatures one may not consider dangerous in the way one would a spider or snake, such as the Blue-and-yellow Macaw. The macaw’s inclusion is due to the disease-causing bacteria that can make their home on the bird. By including such a wide diversity of taxa in her book, Sami brilliantly sparks a curiosity of these incredible organisms in her readers, rather than the fear or repulsion one may typically associate with animals of their calibre. While we may never find the Pork Tapeworm cute and should never reach out to pet a Southern Blue-ringed Octopus, we can admire the gifts that the slow process of evolution has granted them.

A few animals in particular triggered her interest in dangerous animals, one being the Gila monster that she encountered during an Interview at Sydney’s Tooronga Zoo. Sami had never heard of venomous lizards, and the more the keeper divulged about the creature, the more she was hooked. The artist was enthralled with the way people, like the keeper, were drawn to dangerous creatures, despite the risk they may pose. The Spider-tailed Horned Viper was another favourite to be included in her publication. Sami has a love for animals with bizarre adaptations such as this viper, who uses its modified tail to mimic a spider to draw unsuspecting birds to their deaths. Such ingenious strategies help us to see the function behind the danger. Sami hopes her readers can flick through the pages of her book and understand that ‘this is why they look the way they do, and that’s special.’

Sami’s goal is to instil this message of respect and wonder into the younger generation, whom her books are targeted at. It is at this critical age where many habits are instilled in us, and Sami aims to foster a love for all things ‘different’ in her young readers that they may carry with them through life. She hopes her text creates a community for those fascinated by typically less-charismatic species, and to reaffirm their fascination in these wacky animals, despite the negative press they sometimes get.

She also recognises the profound potential that comes from educating children about these creatures. She firmly believes that ‘when kids are reading books, it’s the perfect tool to be able to change the family dynamic,’ which she attributes to the power that kids have on their surroundings. By reading Sami’s book as a family, there is enormous potential for inter-generational change of the perception of these animals.

This project also allowed Sami to encounter and overcome some of her own unconscious biases. Australian Magpies are well known to be very protective parents, swooping passersby who tread too close to their nests. Although admiring of their beauty, after hearing countless swooping horror stories Sami admits she feared that any time she saw the black and white corvid, she was at risk of being swooped. She would avoid their eyes so as not to aggravate them. But after researching the species for her book, she learned that this behaviour was usually only seen in spring, when males protect their offspring, and that looking magpies in the eye actually reduces the risk of swooping. She now wants to pass on this information to children, as she would have loved to have that fear alleviated from her as a child. She can now fully appreciate this iconic species and this incredible, super-dad behaviour.

The importance of Sami’s work in this book has a significant ripple effect beyond conquering personal biases. When it comes to encountering dangerous creatures, our first thought is often for our own wellbeing and protection. However, many of these animals are in need of human help and conservation initiative. Sami’s book allows the average person to be introduced to some incredibly evolved yet vulnerable species, and showcases the significant roles they play in their respective ecosystem, and how catastrophic the loss of these creatures would be for the natural world.

Sami says that if she had a part in changing a handful of people’s minds about a certain animal, her job is done. If we, as individuals, reflect upon how we perceive and treat animals of different taxa, we can put to bed the damaging misconceptions that put these creatures at risk. Great and small, cuddly or dangerous, all animals are equally deserving of our attention, respect and care.

Sami Bayly’s work has so much to offer, from seeing the beauty in all forms of life to reassessing how we perceive value. Readers young and old will put down this collection of illustrations with a newfound perspective on the creatures around them, and how they themselves fit in and interact with the natural world.

To get your own copy of The Illustrated Encyclopaedia of Dangerous Animals click here.

If you can’t get enough of Sami Bayly, check out her new book ‘The Illustrated Encyclopaedia of Peculiar Pairs in Nature.’ 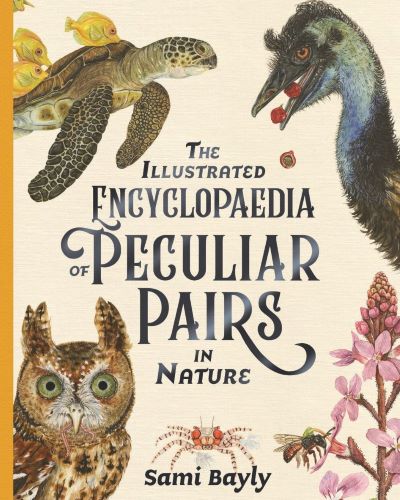 The banner image is of the cover of The Illustrated Encyclopaedia of Dangerous Animals and is courtesy of Sami Bayly.