Port Phillip has a lot to offer; marine life in the Bay is incredibly diverse, interesting and colourful. As a marine biologist who has been scuba diving there for years and still finds new critters on a good proportion of my dives, I should know.

I enjoy the thrill of spotting marine creatures I’ve never seen before. It’s like birdwatching, but underwater. We’ve got all sorts of amazing fishes, cephalopods (squids, cuttlefishes and octopuses), shrimps and crabs, sea stars, seabirds and marine mammals, but I am not here to talk about them.

Today, I want to tell you all about the excitement of going sea slug “hunting”. 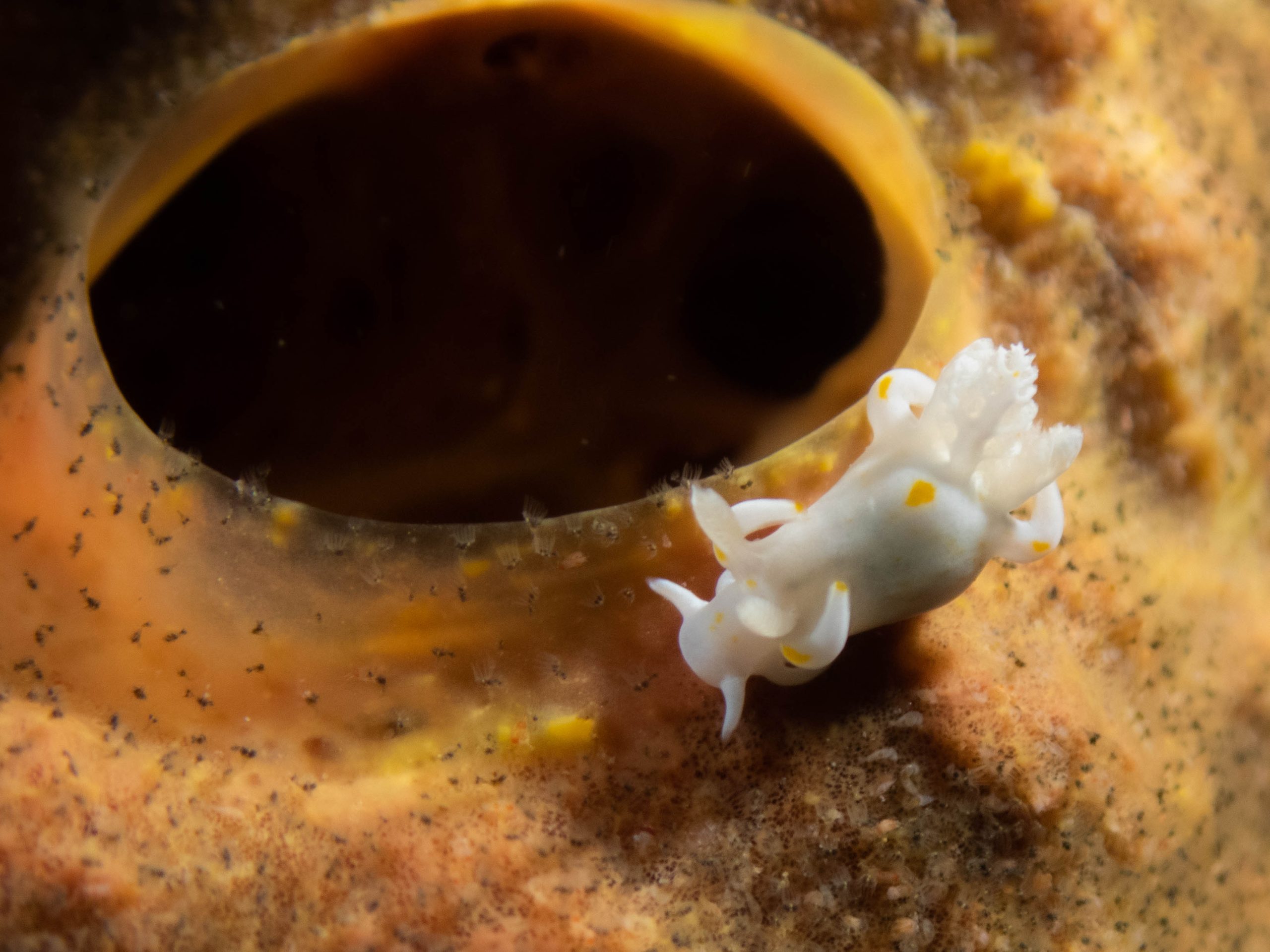 The mission is simple: to find as many sea slugs as possible, photograph them and record where they were found.

At the end of October, after enduring months of lockdown, my partner and I were so ready to get back to the water and help document sea slugs and their allies (small slug-like molluscs) in the Bay! So we headed down to our favourite dive sites on the Mornington Peninsula for the weekend, and what we found did not disappoint.

We had a bit of a slow start at Rye pier, where we found only four different sea slug species; I guess we got distracted by all the other amazing underwater life we came across, including nesting octopuses at Elsa’s Reef, a small artificial reef about 60 meters north of the end of the pier.

Although we didn’t find many species on that dive, we made interesting observations as shown in the two photos below. No, the sea slugs in the first photo are not shaking hands. They’re shaking… penises.

Yep. You heard me!

As is the case for most sea slug species, the individuals in this photo are both male and female at the same time (also called hermaphrodites). When they are “in the mood”, both mates dart their penis toward each other to induce one to act as a male and the other as the female. The first one to successfully penetrate the body of the other (ouch!) is dominant and will act as a male and transfer its sperm.

And then, we got to witness what happens after this rather brutal way of mating. Egg laying. As shown in the second image, sea slugs lay ribbons of eggs in the environment, and each species has egg ribbons of a specific colour. 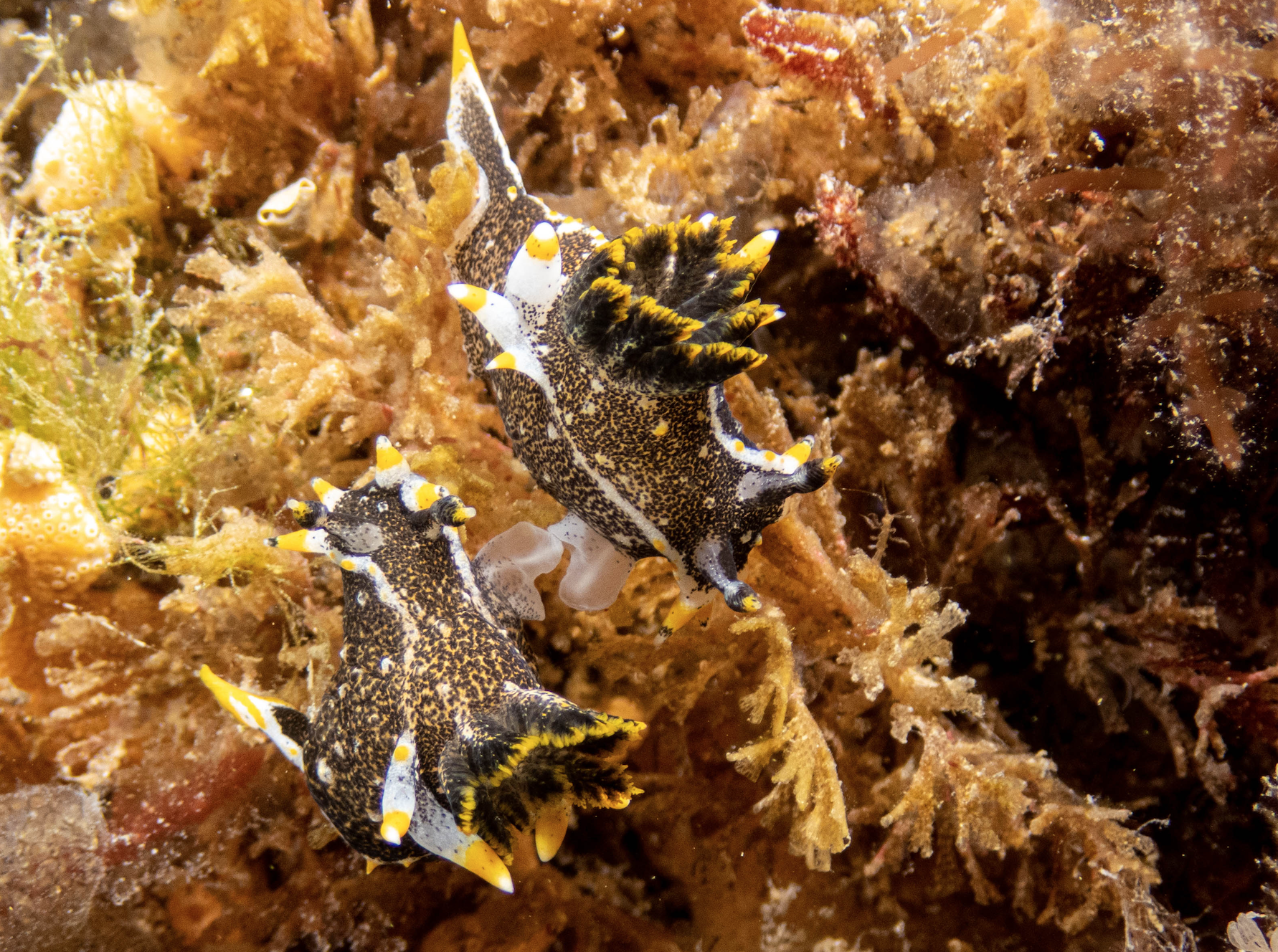 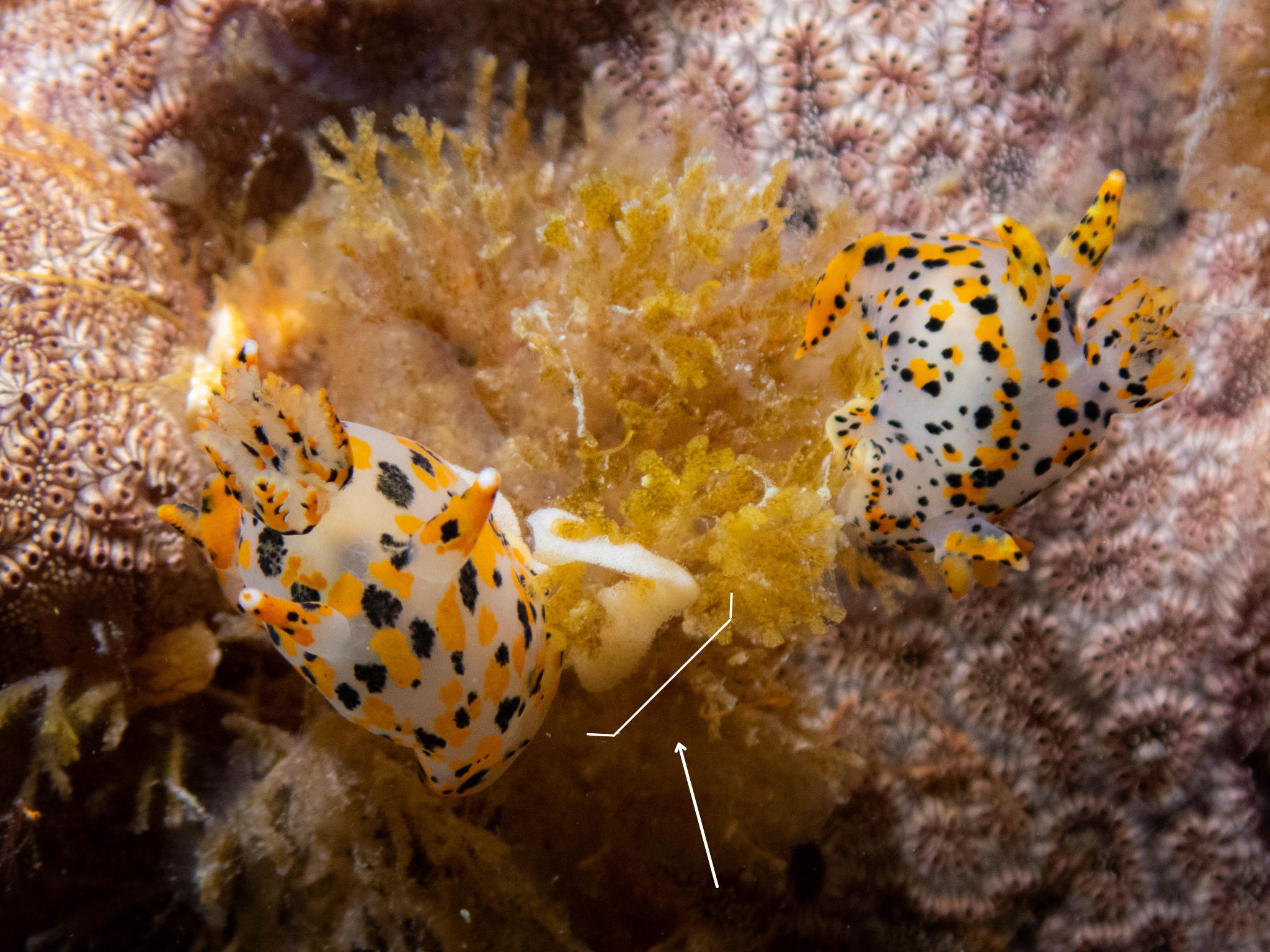 We were happy with these observations, but our next dive under Blairgowrie pier turned out to be even better. We chose to go on a night dive, as there are always myriad exciting critters around at night.

We knew we were probably going to make interesting observations at Blairgowrie, which is somewhat of a mecca for sea slug lovers. In fact, one of Victoria’s most prolific sea slug hunters has documented more than 120 species in Blairgowrie alone! I couldn’t keep track of how many individuals we ended up spotting, but we counted 20 different species on that one dive, making it one of our best sea slug dives to date. This brought the total number of sea slug species we spotted during the sea slug census to 22. 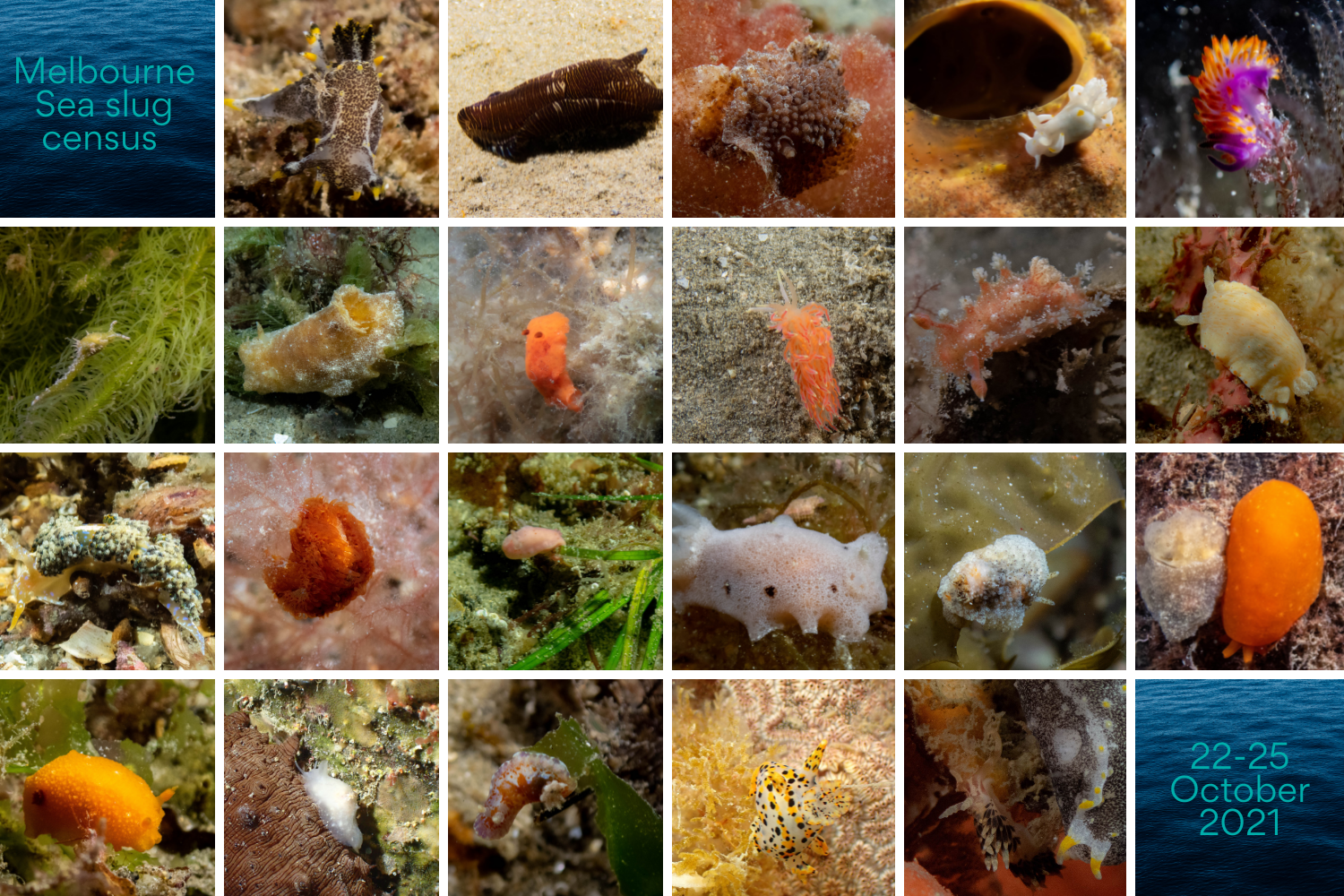 Whilst some species are brightly-coloured and easy to find, others are more challenging to spot, either because they are tiny (think a couple of millimetres long at most) and/or blend in very well with their environment. 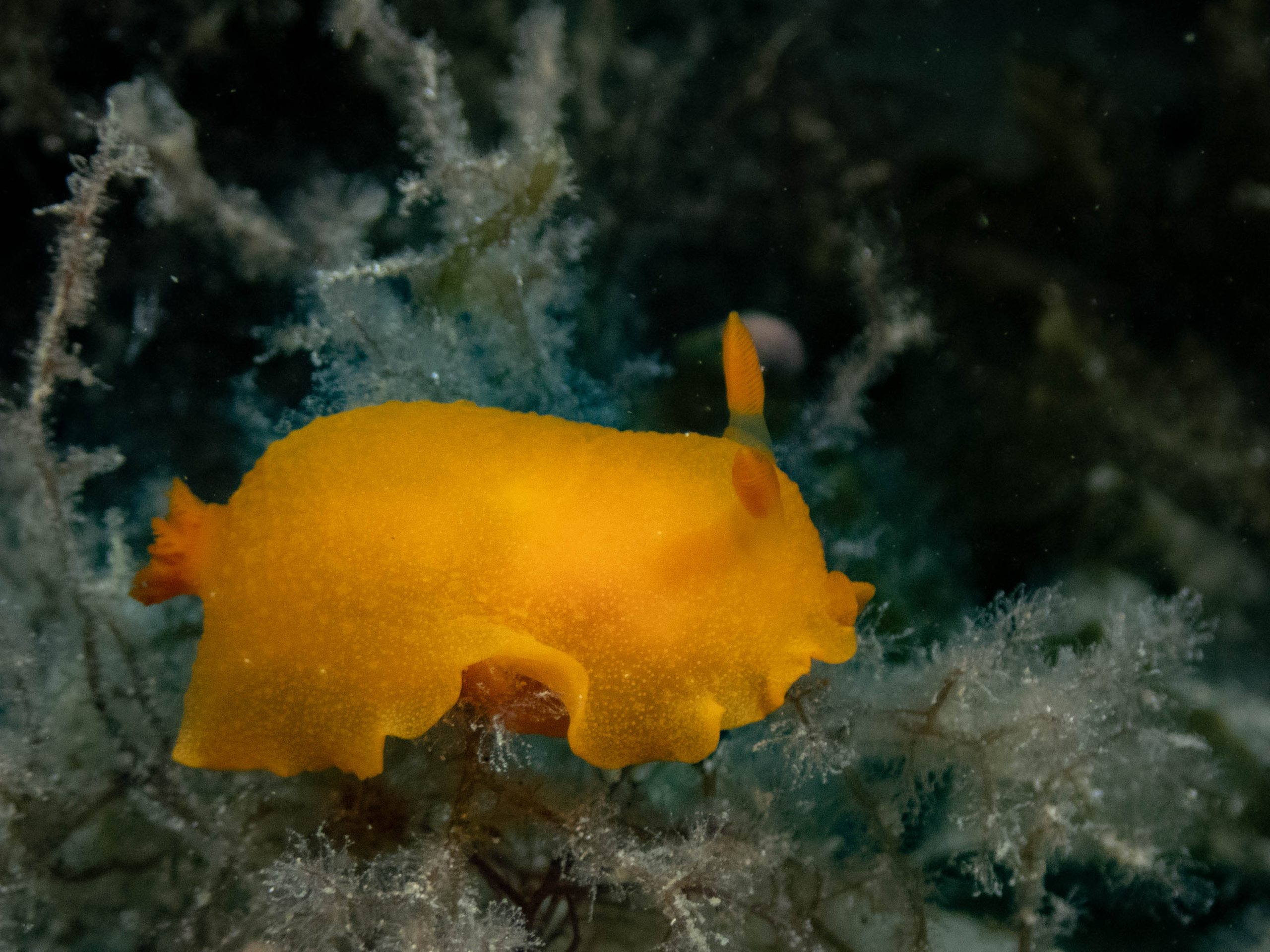 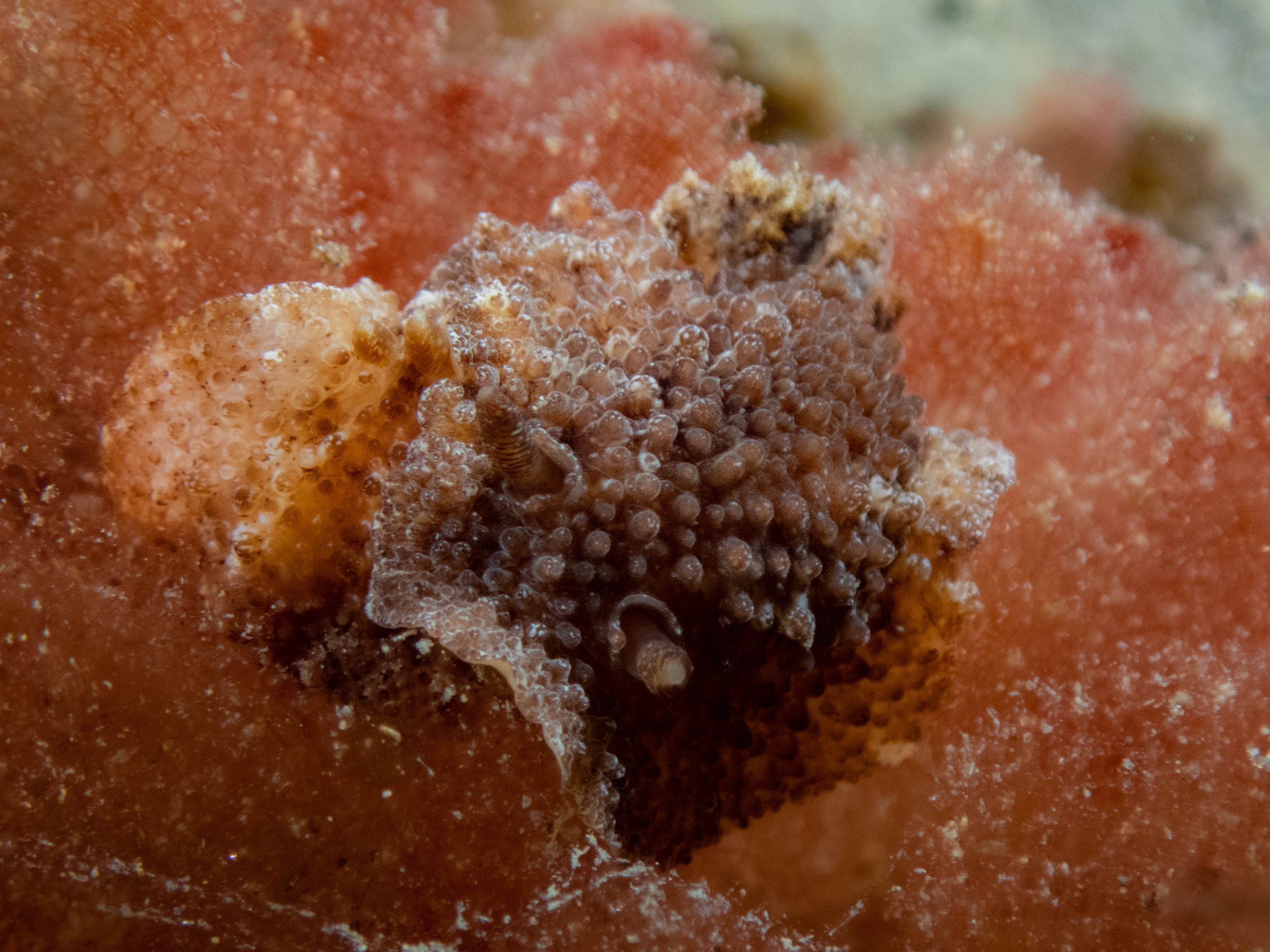 And others are simply there to trick you… like the one below. If you looked at the picture and thought, “Hold on, this one looks a bit different”, you’re right! This is actually not a sea slug, but a beautiful and rare species of flatworm, a very different group of animals scientifically speaking. 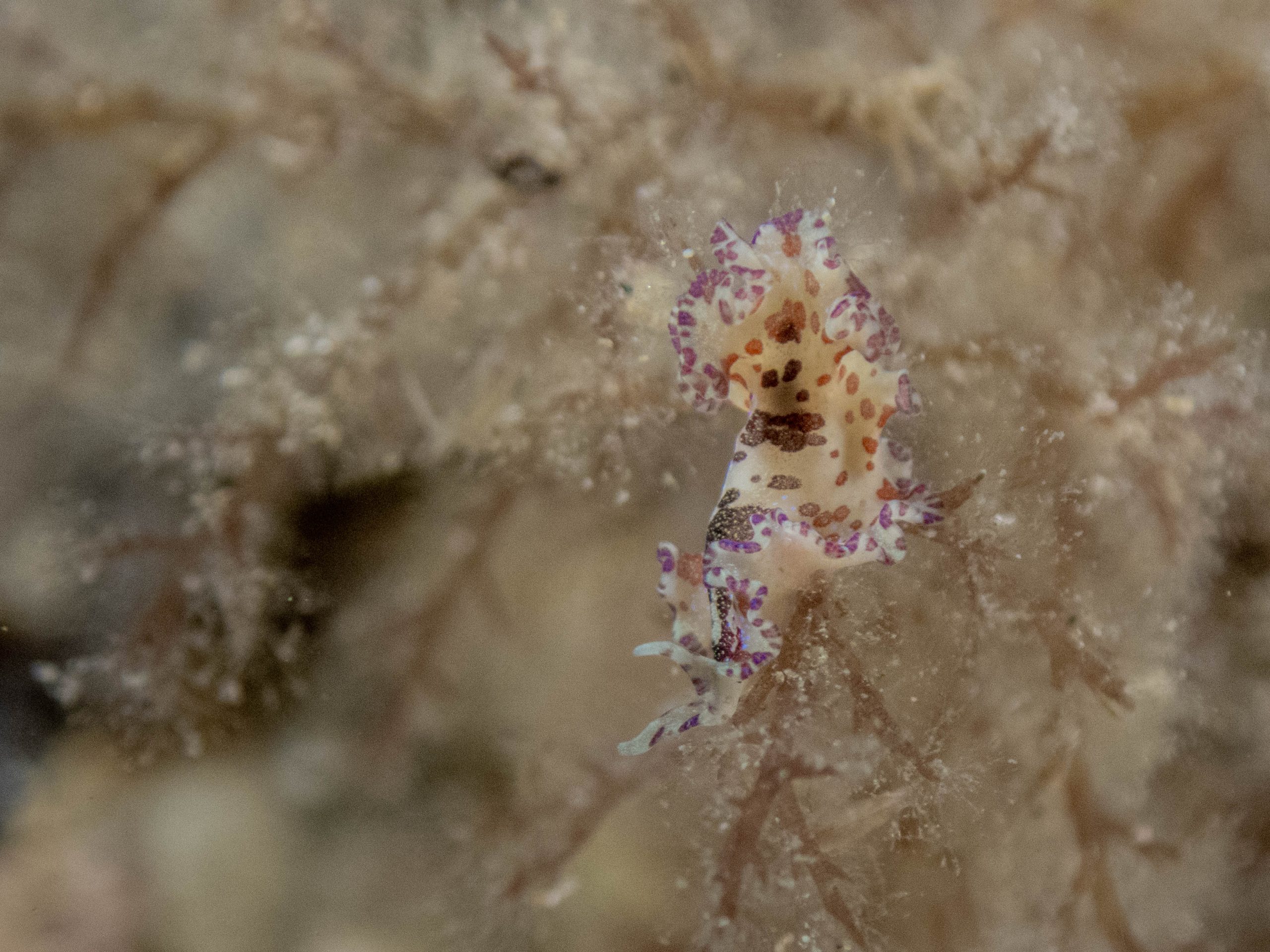 Blairgowrie was busting with life, so much so that it was sometimes hard to focus and photograph specific individuals. In fact, in the photo below, I got two for the price of one! I had not actually realised the smallest of the two sea slugs I photographed was there at all as I was too focused on getting a good shot of the bigger one; I only found out when sorting through the photos at home. 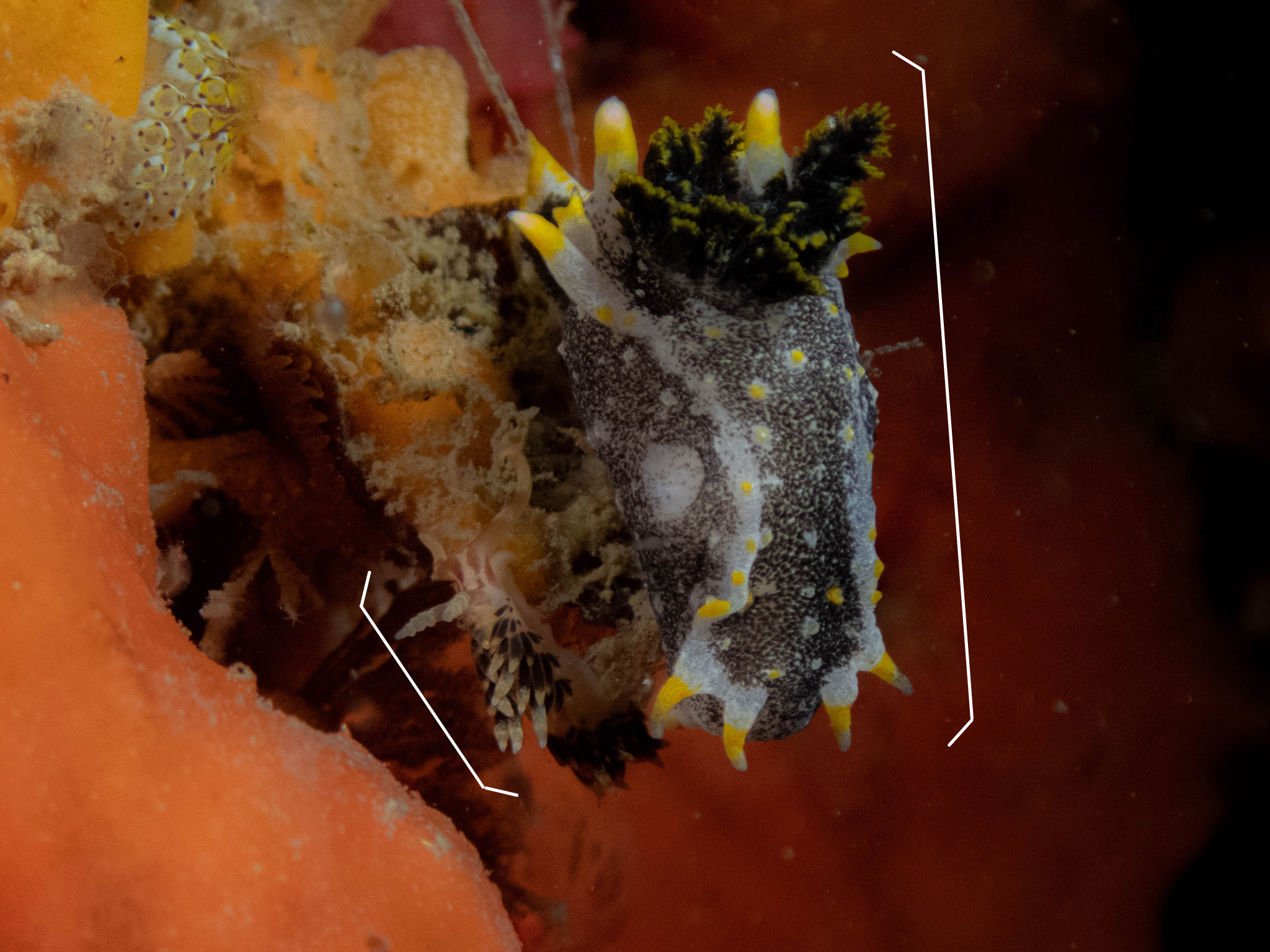 What I also find fascinating is that some of the sea slugs that divers and rock pool ramblers come across in the Bay have not been formally described by scientists yet. This means they don’t have an official name, like the sea slug on the banner image. There are definitely still plenty of discoveries ahead, and citizen scientists can help!

VNPA regularly runs Reefwatch citizen science events you can join if you are interested in finding out more about what’s in the Bay and helping scientists document marine life. Sea slugs, sea dragons or more generally fish populations are monitored through various programs. The next sea slug census will be held this weekend, between the 28 and 31st January.

If you can’t make it, or can’t wait to join the fun, you can help scientists collect data right now and throughout the year.

By submitting your sightings and photos on iNaturalist, you can provide valuable data on your local biodiversity.

You don’t even have to submit your photos to benefit from the project, you can simply head over to look at the kind of marine life found near you so you know what to expect on your next adventures. If you are not familiar with the various species you’ve come across, the community on iNaturalist can help you identify the marine animals and plants you’ve photographed, a welcomed bonus! 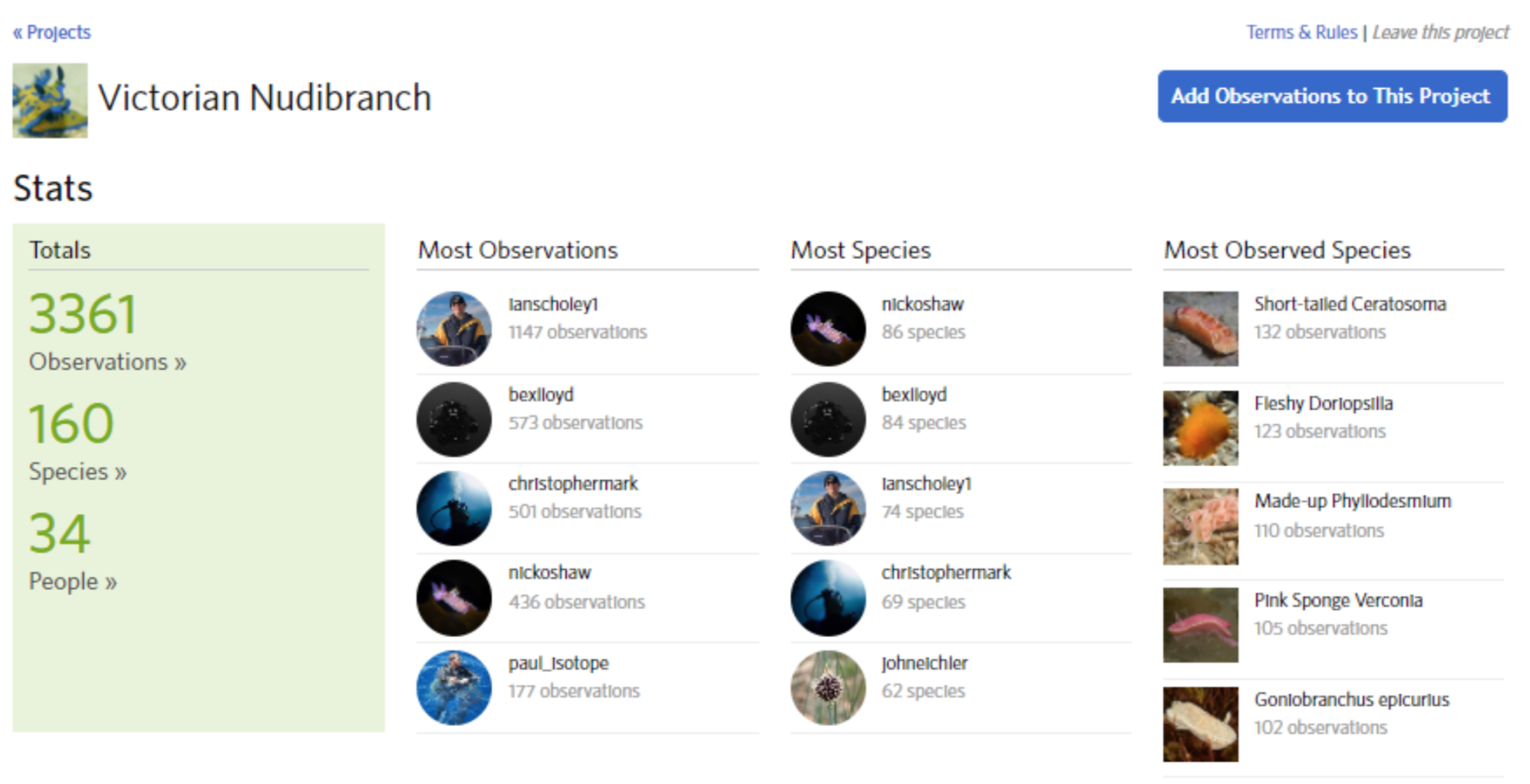 Read more about the Sea Slug Census in Melbourne and the rest of Australia at this link and find more information on how to get involved here.

All photographs by Elodie Camprasse.

Elodie grew up in France and has always had a strong passion for the environment. She completed a Bachelor of Biology and a Masters in Marine Ecology in Europe, America and Africa. A trip to the Subantarctic Islands inspired her to pursue a PhD in Marine Ecology in Australia, whose fauna and flora she fell in love with.

Unfathomable immensity and inescapable fragility: Antarctica beckons travellers to the bottom of the world, but should we go?